No Mercy to Vampire Scum 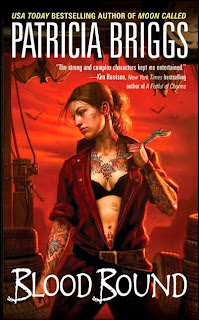 Under the rule of science, there are no witch burnings allowed, no water trials or public lynchings. In return, the average law-abiding, solid citizen has little to worry about from the things that go bump in the night. Sometimes I wish I was an average citizen...

Mechanic Mercy Thompson has friends in low places-and in dark ones. And now she owes one of them a favor. Since she can shapeshift at will, she agrees to act as some extra muscle when her vampire friend Stefan goes to deliver a message to another of his kind.

But this new vampire is hardly ordinary-and neither is the demon inside of him.

Patricia Briggs’ Mercy Thompson -a mechanic who happens to be a coyote skinwalker- returns in the second book, called Blood Bound in her dark fantasy adventure series. In it, Mercy repays a favor to the local vampires (they helped her in the first book, Moon Called) and soon becomes

wrapped up in vampires, demons, and werewolf politics as well as juggling her feelings about certain males in her life.

Like I said in my previous post about Moon Called, there is plenty of sexual tension in Patricia Briggs’ stories but so far absolutely no sex. Which actually isn’t really all that big of a problem because the world she lives in is just one big whirl-wind of adventure in which the little skinwalker always seem to be smack-dab in the middle of. What I would like to know is how Mercy finds time to sleep! 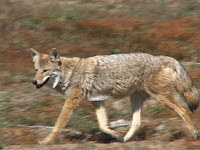 at how many characters from the previous story showed up and played important roles in Blood Bound. I think that the fact although Mercy is incredibly independent, she can ask for help when she needs it makes her a stronger heroine. She’s definitely not at the top of the food chain, and she knows it but she (or someone else) always seems to pull her tail out of the fire in the nick of time.

Wikipedia has a small article on Patricia Briggs but you can find more information on her official site including an excerpt from Blood Bound and author comments.