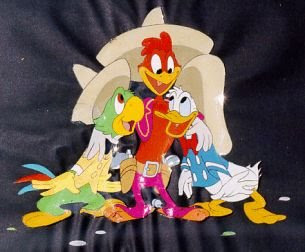 The incomparable Donald Duck stars in his greatest adventure in The Three Caballeros-- a dazzling blend of live action and classic Disney animation bursting with south-of-the-border sights and sounds!

Donald's big birthday surprise, a wondrous collection of gifts, becomes his passport to a magical musical journey with friends Joe Carioca and Panchito. From the Antarctic to Brazil to Mexico, Donald dances and delights his way through a cascade of fiestas, fantasies and fireworks- each stop full of cultural charm and sensational songs!

Disney's upbeat Latin extravaganza is a stunning celebration of visual effects and delectable music-- fine-feathered fun for the whole family.

The Three Caballeros was the first sequel Walt Disney ever made (Saludos Amigos was the first). Actually, it’s a bit of a stretch calling it a sequel. The only things in common are the fact that Donald Duck and Joe Carioca

are in it and the setting is Latin America. Other than that, the plot is pretty much barely strung together under the premise of Donald’s birthday.

This is another movie that I had only seen bits and pieces of before. It started off pretty good with two really cute cartoon shorts; The Cold

Blooded Penguin and The Flying Gauchito, but it went downhill shortly after Donald breaks open his piñata from Panchito Pistoles and the people of Mexico. Then it’s like a a bad hallucinogenic experience until the end. I still think the Three Caballeros is a better film than it’s predecessor Saludos Amigos even if they were both nominated for pretty much the same Academy Awards.

~ I have only seen the VHS version but it had the DVD bonus features (two cartoon shorts, Don’s Fountain of Youth and Pueblo Pluto) at the end.
The Three Caballeros Online
Imdb.com
Wikipedia