It's Wonderful in Wonderland 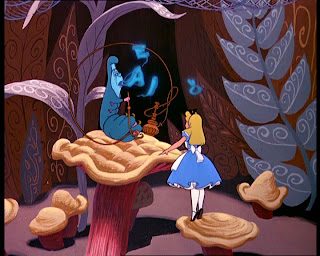 In the hands of Disney's extraordinary animation artists, Lewis Carroll's immortal literary classic comes to life like never before!

The surprises begin when a daydreaming Alice encounters a White Rabbit who is frantically running late. She chases him and falls into the magical, madcap world of Wonderland with its kaleidoscope of off-the-wall characters-- including Tweedledee and Tweedledum, the Cheshire Cat, and the manic Mad Hatter and March Hare, who invite her to a memorable tea party! The crowning confrontation begins when Alice meets the notorious Queen of Hearts and her enchanted deck of playing cards. Tricked into a curious game of croquet, Alice, and her patience, end up on trial. Is there no escape from this whimsical escapade?

Filled with fantasy and topsy-turvy fun, Alice in Wonderland is teeming with spectacular songs and astonishing animation in the highest Disney tradition!

For the longest time Disney’s Alice in Wonderland animated film was my absolute favorite childhood films. One I could watch a million times in a row and never get tired of. Maybe

because it doesn’t make you sad or because it’s just plain fun with all the songs and vivid colors but I always believed it to be one of Walt Disney’s finest achievements.

Recently I’ve discovered that I just might have to agree with the big man himself that the film is a little cold because almost everyone in Wonderland is unkind to Alice at some point or another and she really doesn’t have anyone to act off of. That’s not to say that I don’t still find the story, the animation, the voice work, and the songs absolutely enchanting though. 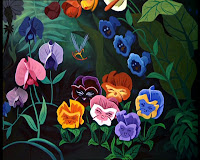 One of my favorite things about Alice in Wonderland is how they used such unique voices and Disney Legends for the characters. Alice herself is played by Kathryn Beaumont who later went on to voice Wendy in Peter Pan. Then there’s Ed Wynn as the Mad Hatter (he appeared in several Disney films including Mary Poppins), Verna Felton as the Queen of Hearts (she played lead roles in Dumbo, Cinderella, Lady and the Tramp, Sleeping Beauty, & even The Jungle Book), and my personal favorite Sterling Holloway who of course played the Cheshire Cat (he has voiced many Disney characters but he’s most famous for Winnie the Pooh). 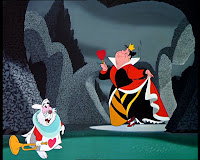 is. Take those interesting creatures found in Tulgey Wood for example, those could have easily been scary for children but they aren’t! Even if I don’t enjoy this little film as much as I used to I have no problem telling you that it’s a genuine treasure that everyone should see.

I recommend this 2-disc DVD to any Disney enthusiast as it includes many songs not used in the final film and quite a few Walt Disney specials like the One Hour in Wonderland and Operation Wonderland.