The De-Tour Through the Disney Studios 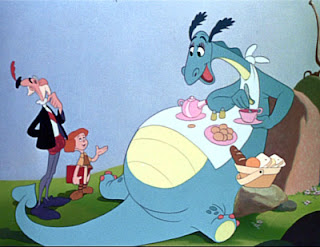 Most dragons in history are fierce, fire-breathing terrors. But The Reluctant Dragon would much rather sit around sipping tea, reciting pun-filled poetry and singing slaphappy songs... until a young boy and a renowned dragon fighter team up to teach the docile creature the fine art of ferociousness! Also includes cartoons Baby Weems and How to Ride a Horse.

The fourth theatrically released Disney movie was The Reluctant Dragon. It was made as a cheap way for Walt Disney to earn back some of the money he had lost on Pinocchio 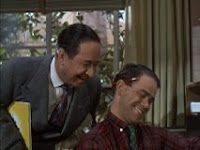 and Fantasia (because of World War II closing off the overseas market). At the beginning of the movie it says:

This picture is made in answer to the many requests to show the backstage life of animated cartoons. P.S. Any resemblance to a regular movie is purely coincidental. 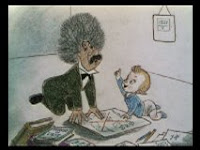 The “film” wasn’t a large success (I’m basing this on info from a book by Michael Barrier and Leonard Maltin in the DVD itself) because after three animated cartoon movies, the people expected some sort of film and not a documentary (sort of like the very first “Walt Disney Presents”) and because it came out at the same time of the infamous Disney strike was happening. The film shows a happy work environment (with mainly actors but animator and Disney legend Ward Kimball happens to be in it) and nothing could have been further from the 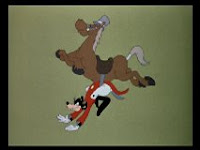 truth, the strikers even picketed at the theaters where the film was shown.

I thought The Reluctant Dragon was a very interesting film and it’s a must-see for every Disney enthusiast. I loved the Baby Weems cartoon, seeing the voice of Donald Duck (Clarence Nash) perform is a real treat, and you get to see the very first Goofy How-To cartoon too. I actually didn’t care for the actual Reluctant Dragon cartoon segment but the “film” overall was a great experience. 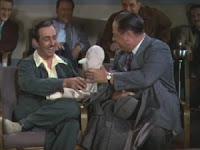 ~The Reluctant Dragon movie is on the 2-disc Walt Disney Treasures: Behind the Scenes at the Walt Disney Studio DVD along with a ton of other things:

Disc 1
· A Trip Through the Walt Disney Studios- This was made for RKO (you can watch it with or without pop-up facts) to see how work on Snow White was getting along and they liked it so much that they wanted Disney to adapt it for the public so he made the next feature listed below.
· How Walt Disney Cartoons Are Made- This one is pretty much the same as above but with a new voice-over and added footage. It was also used as a promotional tool for Snow White and the Seven Dwarfs.
· Leonard Maltin’s Studio Tour- A tour of the college campus-like Disney studio with many clips from the Disneyland TV show and an episode from The Wonderful World of Color called The Back Stage Party.
· Behind the Boards on Baby Weems- Leonard Maltin interviews Disney Legend Joe Grant who; along with Dick Huemer, created Baby Weems.
· Walt Disney Studio Gallery & The Reluctant Dragon Gallery- A gallery of beautiful pictures of the Disney Studios (original and new one) with some audio and more pictures from and behind the scenes of The Reluctant Dragon.

Disc 2
· The Story of the Animated Drawing- A Disneyland TV show episode from 1955 that includes a brief history of the animated cartoon along with the pioneers of animation. There is a recreation of Winsor McKay’s Gertie the Dinosaur vaudeville act; a demonstration of how sound was used in earlier cartoons, and even a sequence from Fantasia.
· The Plausible Impossible- A Disneyland TV show episode from 1956 that explains the plausible impossible (when something in a cartoon is impossible but still remains believable) using Mickey Mouse and Donald Duck and their cartoons. Also includes the deleted Snow White soup scene and the Night on Bald Mountain sequence from Fantasia.
· Tricks of Our Trade- A Disneyland TV show episode from 1957 that shows how the animators taught themselves how to make a convincing animated drawing. Also shows the use of the multiplane camera.
· Kem Webber Gallery- Pictures of the Disney Burbank studio sketches
· Tour of the Disney Studio Radio Program- A rare 1946 radio interview with several of the Disney employees and Walt Disney himself.
Find the Reluctant Dragon Online
Imdb.com
Wikipedia