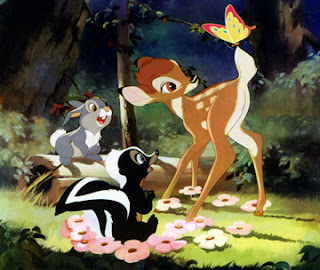 Reflecting an age of innocence and a time of wonder, no film better captures the pure magic of Disney than Bambi- the world's most endearing animated tale about the beauty of nature and the miracle of life. Nominated for three Academy Awards, this immortal blend of classic storytelling and unforgettable characters is most fondly remembered as Walt Disney's all-time favorite picture.

As morning light breaks across the meadow, a new prince of the forest is born. Soon Bambi emerges from the thicket on wobbly legs, much to the delight of his new friends, Thumper, the playful rabbit, and Flower, the bashful yet lovable skunk. But the fun of skating on "stiff water," nibbling fresh blossoms, and frolicking through the woods is only the beginning. Exploring his new world, and guided by the wisdom of Friend Owl, Bambi learns valuable lessons with every adventure- experiencing love, loss, growth and renewal along the way.

In my opinion Bambi is one of the prettiest movies that Walt Disney himself worked on. It’s such a gorgeous, life-like film with adorable animals that have plenty of personality. It’s no wonder Bambi was

nominated for 3 Academy Awards (all to do with music) and won a special Golden Globe award (for furthering the influence of the screen).

I have always loved Bambi because it has the most beautiful songs (especially Little April Shower) and because it makes it seem as if nature itself is the one singing. That's actually the most wonderful thing about the classic Disney movies: the music and

the songs. Although this is one of the rare few that doesn't employ the actual characters in singing, the music flows throughout the entire movie. There are actually only two points in the movie that are completely silent and they are the two that impact the

audience the most. Bambi is not only a love story between Bambi and Faline but a story of friendship, growth, bravery, and survival.

~ I recommend buying the 2-disc DVD if only because of the wonderful story meeting that serves as a commentary on the first disc. Besides that my other favorite thing was the Making of Bambi: A Prince is Born. There are tons of other things on the second disc that I loved as well but I could have done without the “Games & Activities” section.