The First One of All! 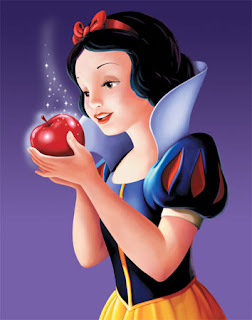 Snow White and the Seven Dwards is the definitive Disney masterpiece. The first full-length animated feature ever made, it is timeless in its perfection and remains the most revered of all Disney films-- from Pinocchio and Bambi, to Beauty and the Beast and Aladdin.

Disney's immortal fairy tale springs to magical life as the lovely Snow White finds romance with a charming young Prince. When Snow White's vain and wicked stepmother, the Queen, consults her Magic Mirror, her worst fear is confirmed-- that Snow White's beauty surpasses even her own! Snow White is forced to flee into the forest, where she befriends seven lovable drawfs- Dopey, Sleepy, Sneezy, Grumpy, Bashful, Happy and Doc. But despite the dwarfs' loyalty, they cannot protect Snow White against the Queen's evil spell... which can only be broken by Love's First Kiss! Fully restored to its original brilliance, Snow White and the Seven Dwarfs overflows with heartwarming romance, rousing adventure, and enchanting music. Now you can finally own the legendary masterpiece that has become a world treasure for all generations!

I can’t say anything about Disney’s Snow White and the Seven Dwarfs that hasn’t been said a million times before. The animation is beautiful and withstands the test of time well, the characters

are timeless, and the story is known to every man, woman, and child. Oh, and it was Walt Disney’s first animated movie as well as one of the first animated films ever made. Not to mention the fact that it won two Academy Awards. One for Best Music Score and the other was an Honorary Award (one statuette - seven miniature statuettes). See? All the same things you’ll find for every review on this film!

Snow White has never actually been one of my favorite Disney movies, but I do like it (of course!). To be honest Snow White is my least favorite princess in the long line of Disney princesses. She’s cute and childlike but I believe that the whole reason this movie is still adored today is because of the dwarfs. Most people love Dopey for some reason but I have to go with Grumpy. Did you know that Pinto Colvig is the voice of Grumpy? He’s the same person that voices Goofy, weird huh? 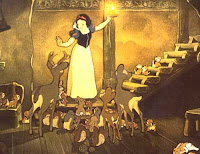 ~ I have seen the 2001 2-disc DVD edition of Snow White but it’s been awhile. The version I watched for this review was the first home video debut VHS from 1994(I received it for Christmas that year). The only notable thing about is that it is introduced by Walt’s nephew Roy E. Disney and it talks a little about Snow White but mainly about the (then) new movie Pocahontas. I do plan to buy the DVD to add to my collection someday soon and I will then revise this review.

Here are the Song Lyrics!

One of the Original Trailers: