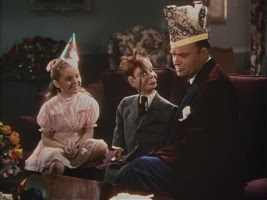 Fun and Fancy Free, Walt Disney's 9th full-length animated masterpiece, is a delightful gem that not only sparkles with charm, but is unbelievably rich in history-making Disney moments. It was the last animated feature starring Walt Disney as the voice of Mickey Mouse, and the only film featuring all four of Walt Disney's most famous characters- Mickey Mouse, Donald Duck, Goofy and Jiminy Cricket.

Following Disney's classic tradition of great storytelling, unforgettable characters, music and adventure, Fun and Fancy Free is the joyful telling of Bongo and Mickey and the Beanstalk- two timeless tales magically brought to life by the beloved Jiminy Cricket and the masterly combination of animation and live action.

And now, in celebration of its 50th anniversary, Fun and Fancy Free has been beautifully restored so a whole new generation can experience the magic of Walt Disney's original theatrical vision- for the very first time! One of Disney's happiest films ever, Fun and Fancy Free makes a valuable addition to your Disney video collection.

Fun and Fancy Free is another Disney package film (that I don’t think I’ve seen) but unlike Make Mine Music and later Melody Time, it’s not a bunch of random cartoons thrown together. Instead this 9th animated feature in the official canon actually somewhat resembles a motion picture because Jiminy Cricket (the "little green man with no ears" created by Ward Kimball for Pinocchio) ties the whole movie together with a little help from Edgar Bergen and his puppets, Charlie McCarthy and Mortimer Snerd.

The cartoon shorts’ inside the film; Bongo and Mickey and the Beanstalk, were originally planned to be stand-alone features but they were too long to be cartoon shorts and too short to be feature films so this is where they ended up. I remember seeing both of the cartoons on TV before because the Disney Company cut them up and released them on one of The Wonderful World of Disney (Wonderful World of Color, etc) without the voice overs that are in Fun and Fancy Free.
I think every Disney film should receive it’s own special 2-disc edition but there wasn’t a whole lot put into the marketing or 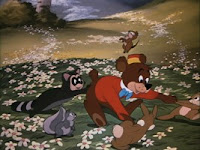 making of this one. It’s just a little often-seen animated movie that is only historically significant to any Disney fan because it’s the last time Walt Disney himself was the voice of Mickey Mouse. I wouldn’t hesitate to watch this again but I probably won’t be going out of my way to see it.
~ I have only seen the VHS copy of this film. At the end was a featurette called The Story Behind Fun and Fancy Free which was really informative and interesting but a little on the short side. Also included was a music video of Lou Bega’s Disney Mambo #5, which is a clean, kid-friendly version of his original song that I honestly could have done without.
Fun and Fancy Free Online
Imdb.com
Wikipedia
BCDB.com
Link:
Song Lyrics

The Story Behind Fun and Fancy Free: