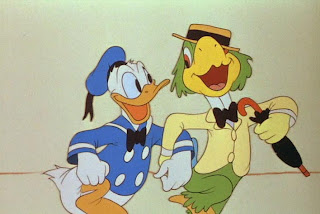 A whimsical blend of live action and animation, Saludos Amigos is a colorful kaleidoscope of art, adventure and music set to a toe-tapping samba beat. Your south-of-the-border traveling companions are none other than famous funny friends, Donald Duck and Goofy. They keep things lively as Donald encounters a stubborn llama and "El Goucho" Goofy tries on the cowboy was of life- South American-style.

From high Andes peaks to Argentina's pamas in the sights and sounds of Rio de Janeiro, Saludos Amigos is a hilarious visual feast that will entertain and delight the whole family.

Saludos Amigos is kind of like a travel brochure of South America with just enough cartoons thrown in to keep the viewer interested. It is the shortest Disney film ever made and I think it’s the least popular in the United States. At least it was a huge hit in South America and that was

what it was aiming for with the government’s “Good Neighbor Policy” to keep them from siding with the Nazi’s during WWII.

Donald Duck, Pedro-small airplane cartoon, El Gaucho Goofy- Goofy, and Aquarela do Brasil- Water Color Brazil with Donald Duck and José Carioca). I can’t say I missed much but it was fun to see various clips of Walt Disney himself interacting with the locals. This is an informative and semi-interesting film but unless you’re a rabid Disney fan I suggest just finding the cartoons somewhere online and skipping the movie. That’s just my opinion though. 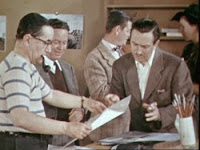 ~ I watched a VHS copy of Saludos Amigos. I have heard that there is a DVD but it has very little in the way of special features. On the VHS copy I watched was the main bonus feature that is supposedly on the DVD. It’s called South of the Border with Disney and it’s actually kind of boring for the most part (I actually thought it was part of the “movie” at first).