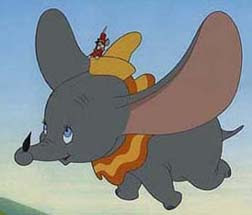 One of the true Disney masterpieces... the poignant animated Classic about Dumbo, a baby elephant born with oversized ears. Snubbed and ridiculed by all the other circus folks, he is befriended by a jocular mouse named Timothy. With luck, determination and an amazing amount of courage, Dumbo learns to soar as the high-flying star of the circus. Delightful, enchanting and touching. Dumbo remains one of the most popular, loveliest films from the mast of animated entertainment.

. It even saved the Walt Disney studios from going bankrupt. The film was made during the Disney strike (notice the clowns that sing about going to “hit the big boss for a raise”?) and a couple of weeks before Pearl Harbor but it still made a good bit of money for Disney. It’s not hard to see why because it’s ultimately a story of the underdog and his eventual triumph. There are a couple of beautiful songs in the movie as well (the music score won an Oscar and the song "Baby Mine" was nominated for Best Song).

I have many favorite Disney movies but very few will make me cry when I watch them like Dumbo does. The animators made it seem less artistic than the previous animated films and much more like the characters are actually acting. So even though cost was a major issue while this was in the making, it doesn’t show at all. If anything, I think it made Dumbo even better!

~ I refuse to buy the DVD until they come out with a 2-disc.