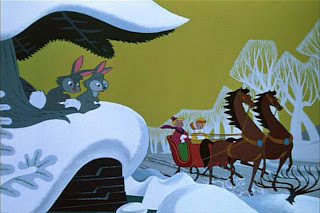 In the grand tradition of Walt Disney's greatest classics, Melody Time, Disney's 10th animated masterpiece, is a high-spirited blend of music, fun, and fantasy. An adventure in animation and storytelling, this genuine Disney treasure can now be enjoyed by the whole family!

Melody Time is a wondrous showcase of seven classic stories, each enhanced with great music and unforgettable characters. Donald Duck- and all-time Disney favorite- puts on a display of jazzy antics as the star of "Blame it on the Samba." Music becomes a real adventure for a busy bumblebee in "Bumble Boogie." From the mischievous young tugboat in "Little Toot," to the heroes of legend and myth in "Johnny Appleseed" and "Pecos Bill," this feast for the eyes and ears entertains with wit and charm.

I seem to recall seeing Melody Time at some point when I was little but once I sat down for a re-watch, it was like seeing many of the cartoons for the first time. This package film is a lot like a pop-version of Fantasia or it’s predecessor Make Mine Music but it still can hold it's own. I really enjoyed some of these cartoons and others I could have done without but they're from 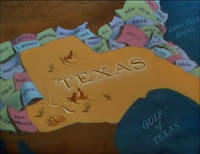 Walt Disney's reign over his studio. I just wish he would have had time to make more.
There are seven cartoons included in this feature... well eight if you count the title sequence and each one is sung by a different person who was popular in the 40's (when this was made). There’s slow music, upbeat and fun music, a recitation of a famous poem, and two shorts about some American Legends. There is one edited scene in Pecos Bill that I wasn’t happy about but I’m just glad it wasn’t completely cut out of the picture!

Here are the shorts in order:
Melody Time- Buddy Clark croons the beautiful opening song during the credits but the theater masks in the animation are incredibly creepy.
Once Upon a Wintertime- I liked the love song that is sung by Frances Langford and I

thought the animation was cute and interesting in the fact that the animators used color to express mood. Also, is it just me, or does the boy look like a grown up version of Peter from the Peter and the Wolf short that appeared in Make Mine Music?
Bumble Boogie- This has to be the most interesting instrumental number in the movie! It’s a jazzy, energetic piece that was inspired by Rimsky-Korsakov’s classic Flight of the Bumblebee. The abstract animated sequence is a little odd and reminds me of something that would appear in Alice in Wonderland.
Johnny Appleseed- One of my favorite cartoons in the feature which tells the story of John Chapman, better known as Johnny Appleseed. There are some really great songs in this cartoon and amazingly, all the voice work (including the singing!) is done by TV personality Dennis Day. Keep your eyes peeled for a chipmunk that bears a striking resemblance to Dale (Chip and Dale)!
Little Toot- This one is cute and it’s based on the children’s story by Hardie Gramatky but it reminds me of some of Disney’s other anthropomorphized machines such as Pedro the Plane. It’s narrated by the wonderful Andrews Sisters but I prefer their other collaboration with Disney, Johnnie Fedora and Alice Bluebonnet which was in Make Mine Music.
Trees- Is a recitation of the famous poem by Alfred Joyce Kilmer done by Fred Waring and the

Pennsylvanians and set to artistic animation. This is my least favorite of the shorts and it feels really out of place to me but it is very pretty.
Blame it on the Samba- This was obviously left out of Saludos Amigos or The Three Caballeros and it really shouldn’t have been. It’s a fascinating and exotic cartoon straight out of Latin America with live-action performances by the Dinning Sisters and Ethel Smith mixed in with the animation. I wish there were more cartoons of Donald Duck and Joe Carioca, I loved seeing him again!
Pecos Bill- The final cartoon and one of the very best. It’s the story of the American legend himself told by one of America’s legends, Roy Rogers and his horse Trigger. The child stars Bobby Driscoll and Luana Patten also make an appearance. Some people might find parts of this cartoon offensive but it’s much better than some of the stuff on TV nowadays.
~ I’ve only seen the VHS. The DVD version includes some other cartoon shorts as bonus features such as Donald Applecore, Lambert the Sheepish Lion, and Casey Bats Again.