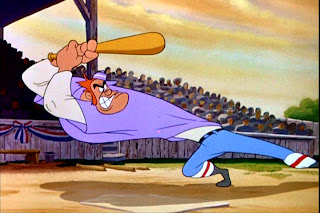 In the tradition of Fantasia, Make Mine Music is a glorious collection of nine musically charged animated shorts featuring such fun-filled favorites as "Peter And The Wolf", narrated by the beloved voice behind Winnie The Pooh. In addition, you'll enjoy such classic cartoon hits as "Casey At The Bat," "The Whale Who Wanted To Sing At The Met" and "Johnnie Fedora And Alice Bluebonnet," the whimsical adventure of two hats who fall in love in a department store window.

Every member of your family will bond to a favorite within this musical medley of fun and fantasy from Disney!

There are very few animated Disney movies that I haven’t seen before (or have seen only once for that matter) but Make Mine Music makes that list. I hesitate to call it a

movie because it is actually a "package film" which is a motion picture that is made up of several shorter films to become feature-length (over an hour long). Quite a few of these package films were made by the Disney Company in the early 1940’s because of WWII and short funds.
The only thing that ties the cute shorts together in Make Mine Music is the music which is performed by popular singers from those days like The Andrews Sisters, Benny Goodman and

his Orchestra, Dinah Shore, etc. The shorts in the movie were in fact later released as regular cartoons, most of which you can find on various video search engines. I was very disappointed that one of the shorts from the film called The Martins and the Coys had been cut out in newer releases because of the "comic gunplay" but I’m glad that it was the only one that was.

There are eight really good cartoon shorts paired with soft or really upbeat music (it alternates for the most part) in all that make up the film, they are:
Blue Bayou- A beautiful short worthy of Fantasia, which ironically it was actually meant to be

for originally, but the song by the Ken Darby Chorus just doesn’t do the animation justice.
All the Cats Join In- A "Jazz Interlude" that is one of my favorites. It’s a very "swingin" song by Benny Goodman and his Orchestra that matches the animation perfectly in which an animated pencil tries to keep up with, and draw the rowdy kids and the music.
Without You- A "Ballad in Blue" that is an artistic, little impressionistic piece that is crooned by Andy Russell
Casey at the Bat- This is a "Musical Recitation" of the famous poem by Ernest Thayer performed by Jerry Colonna. I honestly think it is one of the best animated shorts in the entire movie and it was the only one that

was made into a sequel called Casey Bats Again.
Two Silhouettes- The use of rotoscoping in this "Ballade Ballet" works nicely with the song by Dinah Shore
Peter and the Wolf- A Russian "Fairy Tale with Music" that is narrated by Disney legend Sterling Holloway and is all instrumental. It has the cartoon-look of Casey at the Bat and Peter actually resembles Pinocchio in a few shots.
After You’ve Gone- A brightly colored, upbeat instrumental fantasy by the Benny Goodman Orchestra
Johnnie Fedora and Alice Bluebonnet- My favorite short (and song) in Make Mine Music. It’s "A Love Story" sung by the incredible Andrews Sisters.

The Whale Who Wanted to Sing at the Met- (also known as Willie the Operatic Whale) I’ve never been too big on opera but this is pretty good and what’s even more impressive is Nelson Eddy not only narrates the entire cartoon but he also performs every vocal too. This is the saddest of the segments included in this package film.
~ I have only seen the VHS version of Make Mine Music but at the end was a Mickey Mouse short called The Band Concert and a Silly Symphony called Farmyard Symphony which I had never seen before. There are no plans for releasing a new special edition DVD as of now.