Something to Dream About 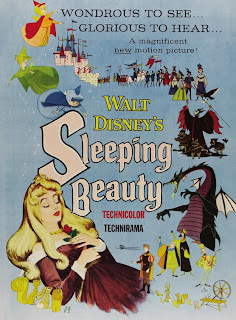 A spectacular achievement in the art of animation, Walt Disney's Sleeping Beauty has awakened-- the dazzling beauty of this timeless animated masterpiece is now fully restored. Created in the Disney tradition of Snow White and the Seven Dwarfs and Cinderella, the unforgettable story is a breathtaking tapestry of charming romance, majestic spectacle and electrifying adventure.

Once upon a dream, the lovely Princess Aurora is gifted with grace and beauty-- but she provokes the jealousy of the wicked fairy Maleficent. A delightful trio of kindhearted Good Fairies do their best to protect their beloved Princess-- but even their magic is no match for the terrifying Mistress of All Evil, and Aurora falls into an enchanted slumber. The heroic Prince Phillip must brave many dangers-- and finally battle a ferocious fire-breathing dragon-- if he is to wake Princess Aurora from her eternal sleep!

With a magical Academy Award- nominated score adapted from the immortal music of Tchaikovsky, Sleeping Beauty is a cherished classic for every family and one that they will enjoy again and again.

episodes, Sleeping Beauty “took six years [not including story development], and six million dollars to make.” It was the last hand-inked Disney animated feature film, the first of the animated films to stop having Walt Disney’s personal touch because of all the other projects he was involved in (Disneyland, the TV show, and his live-action movies), and it’s the most beautiful, decorative, sophisticated, and intricately Disney movie ever made and though the most expensive, it was still wildly successful at the box office, yet it still didn’t make back as much as went into it.

This is such a beautiful film, more like a medieval painting, tapestry (which is the inspiration actually), or book artwork that’s fantastically rendered for the first in technorama 70 which is really, really wide- screened. The animators of the film made sketches based on medieval tapestries to get the look of the film and it was because of this that everything in Sleeping Beauty is in focus from every leaf to lines in clothing from characters in the background. The Disney studio had n

ever done a film like this before, especially after the invention of the multi-plane camera, which lets the backgrounds fade out of focus while still giving the illusion of depth. This sharp focus is what I loved about this particular film as a child; the forest scenes in particular captured my imagination. To be honest, the backgrounds outstage the characters and the story.

Two of the best of Disney’s animators who are also part of the famed 9 Old Men, Ollie Johnston and Frank Thomas animated the comic relief in this film, the three Good Fairies which happen to be my favorite characters in the film. It isn’t all that surprising considering they are my favorite Disney animators! It was Flora, Fauna, and Merryweather that are the heart of this picture and the reason I enjoyed it as a child. Well, them and Prince Phillip (voiced by Bill Shirley) and his horse Samson- he’

s the only Prince in Disney history I ever truly liked! Maleficent on the other hand, used to terrify me and I think she’s the very best Disney villainess followed closely behind by Lady Tremain the Wicked Stepmother from Cinderella. Funnily enough, they’re both voiced by the same woman, Eleanor Audrey which I didn’t find out until I was much older. She originally turned this role down because she was fighting tuberculosis at the time but thankfully, she went ahead with it because no one else could have given Maleficent the presence and cold menace that is that character without making it seem too much.

t somehow despite similarities, this manages to be a completely unique picture with its one-of-a-kind characters. Aurora/ Briar Rose has always been my favorite princess from Walt Disney’s era (During my childhood was when the great Disney princesses came out though: Belle, Ariel, Jasmine, etc).because she’s gorgeous, charming, sophisticated, thanks to her animator Marc Davis (who also did Maleficent) and has a beautiful voice thanks to opera singer Mary Costa. However, I’ve always felt like the rest of the movie just moves around her even if she’s what the entire movie is about. Matter of fact, I believe she’s on-screen less than any other character! When asked what kind of personal connection she had to the film, Mary Costa (Aurora/ Briar Rose) said, "For me, Sleeping Beauty is like a beautiful glass time capsule where the joyest part of my you

th has been kept preserved and eternally sealed. I’ve always felt that it was just a blessing. It was such an honor for me to do that," Ms. Costa, we're the ones who are blessed. No one could have done her voice better.

Tchaikovsky’s music and George Bruns interpretation of it helped tell Disney’s version of the charming fairytale, (filmed in “Technorama 70” for its theatrical release) b 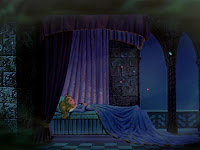 ut more than any other film, Sleeping Beauty looks and sounds like it could be part of Fantasia because the music is hauntingly beautiful. The soundtrack was even nominated for an Oscar and a Grammy! However, the actual animation is so finely detailed that no other Disney film can match it. This is in part thanks to the vision of Eyvind Earle an animator at the studio who was put in charge of the look of the entire film- everything from the backgrounds (which he painted a good bit of himself) to the style. He even had some input on the characters which didn’t go over too well with the animators. When it’s all said and done though, Sleeping Beauty is wonderful because of his and many other people’s contributions. It was the end of an era and it went out with a bang.

Merryweather: I'd like to turn her into a fat ol' hop toad.
Fauna: Now, dear, that isn't a very nice thing to say…
Flora: Besides, we can't. You know our magic doesn't work that way.
Fauna: It can only do good, dear. To bring joy and happiness.
Merryweather: Well, that would make me happy.

Merryweather: It looks awful.
Flora: That's because it's on you, dear.