Always Let Your Conscience Be Your Guide 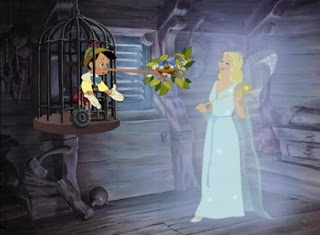 A timeless musical fantasy that has touched the hearts of millions throughout the world, "Pinocchio remains the most perfect animated feature Walt Disney produced" (Los Angeles Times). This legendary milstone won two Academy Awards, for Best Score and Best Song, "When You Wish Upon A Star," the all-time classic that echoes the universal theme of love, family and friendship.

While the kindly toymaker Geppetto sleeps, a blue fairy brings his beloved marionette Pinocchio to life, beginning a fantastic odyssey that will test the wooden puppet's bravery, loyalty and honesty-- virtues he must learn to become a real boy. Despite the warnings of his wise friend, Jiminy Cricket, Pinocchio befriends a variety of roguish characters, leading up to his climatic battle with Monstro the whale!

For over fifty years, this inspiring tale about the magical power of believing in your dreams has delighted generations. Now, the fully restored Pinocchio can be enjoyed forever in the heart of anyone who has ever wished upon a star.

Pinocchio was Walt Disney’s second animated film and to tell the truth, I think it’s one of the darkest Disney movies ever made. I know Monstro the whale scared me silly when I was little and I remember being very thankful I was a girl when I watched the little boys turn into donkeys! My favorite part of the whole movie is actually the same then as it is now: the clocks and music wind-ups. They are so intricate and real looking.

Out of all the Disney movies I’ve watched again and again over the years, I think Pinocchio is one of the ones I have seen the least of. It’s a superb film, I love the songs (who doesn’t?!), and Jiminy Cricket (voiced by the wonderful Cliff Edwards) is one of my favorite Disney characters but I’ve never actually cared for Pinocchio himself. He’s a good little character but I think all the other people around him are much more interesting! This is a great movie to share with your family… especially those little boys that are prone to telling tall tales.

~ I have only seen the VHS of Pinocchio. At the end was a “Making of Pinocchio” featurette which was interesting but not as informative as I would like. I’m really looking forward to the 2-disc DVD release expected out in 2008.

Here are the Song Lyrics!


Give a Little Whistle Song: