The Jungle is Jumpin’! 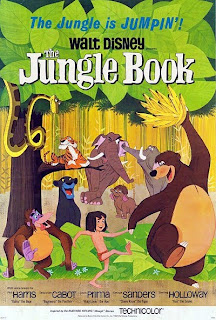 Snap your fingers, tap your toes and swing into the jazziest jungle of them all in Walt Disney's coolest Classic, The Jungle Book!

This animated gem springs brilliantly to life when Mowgli (Bruce Reitherman), an orphan boy raised by wolves is encouraged by his animal friends to leave the jungle before the return of the fearsome man-eating tiger, Shere Khan (George Sanders). With Bagheera (his loyal panther friend voiced by Sebastian Cabot) at his side, Mowgli's journey back to the "man-village" begins. Along the way, he is befriended by a free-spirited bear named Baloo (Phil Harris), who rescues him from hilarious run-ins with some of the wildest Disney characters ever created-- eccentric elephants, a bewitching boa (voiced by Sterling Holloway) and a be-boppin' orangutan named King Louie (Louis Prima)! Through it all, it's lovable Baloo who teaches Mowgli the "Bare Necessities" of life and the true meaning of friendship. Filled with wonderful music and thrilling adventures, The Jungle Book is a swingin', singin', song-filled celebration you'll never forget!

Walt Disney’s nineteenth animated feature film The Jungle Book is the last film that Mr. Disney himself was involved in from start to almost finish before

he died. It was nominated for an Oscar, had all of his legendary Nine Old Men working on it, and became such a popular film that it inspired many of today’s animators on their career path. Not to mention that this was the first time so many high profile actors were used in a feature film. Many characters from this film even appeared on the Disney Channel cartoon show Talespin from the early 1990s and Jungle Cubs from the 1996-1998.

When Walt Disney decided to make his next all-animated feature film after The Sword in the Stone, it was decided that it would be 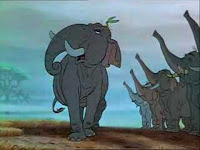 an adaptation of Rudyard Kipling’s The Jungle Book. However, when he learned that his storyman Bill Peet, Terry Gilkyson and a few others were making a faithful adaptation of Kipling’s book, he stepped in. Walt essentially wanted to make a film about a child raised by animals who now has to go back to human civilization because he can no longer survive in the jungle. He didn't really want Rudyard Kipling's somewhat darker, mysterious story to get in the way of that. Peet had worked a year on the material so when his ideas were discarded he left the studio. However, a good majority of his ideas were actually used if not exactly the way he intended them.

According to one of the main composers of the film he said that Walt called a meeting and “Woolie Reitherman who was called in, Larry Clemons who was a writer,

came in, [the Sherman Brothers], and a number of other key people were brought in to a meeting in Walt’s office. The conversation went something like this: Walt said, “How many of you fellas read Kipling’s Jungle Book?”… “No? Good. I don’t want anybody to read this book. I want to tell you what I want to see in this picture.” And he started describing the story, and the storyline was simply that a boy was raised by wolves and he was taken to the man village for his own safety and he had to live there but reluctant to go because he wanted to stay and he has adventures along the way. He meets all these various characters.” In other words, “Disney simplified the story to the bare necessities.”

Walt told the Sherman Brothers, “I want fun songs. Find the scary places and write fun songs.” Write fun songs they did! “The I Wanna Be Like You” number and scene was actually inspired

by Louis Prima (and his band) who voices King Louie and the vultures were inspired by British invasion bands like the Beatles and their song “We’re Your Friends” was originally a rock-type of song but to give it a more timeless feel it became a barbershop quartet song. Even Kaa the snake (Sterling Holloway) got a song that was originally intended for Mary Poppins called "The Land of Sand" that became "Trust in Me". The one song everyone remembers the most from the film was actually the only one not written by the Sherman Brothers and was from the original score done by Terry Gilkyson and that was "Bare Necessities", which was nominated for the Best Song Academy Award (it lost to Doctor Dolittle’s "Talk to the Animals").

What I like the most about The Jungle Book is the characters though it’s never been one of my favorite Disney movies; I’ve always appreciated the fun songs, brilliant actors and animators,

and the beautiful overall look of the film. I’ve always loved Bagheera; who is voiced by Sebastian Cabot (the narrator from The Many Adventures of Winnie the Pooh which had director Woolie Reitherman’s son Bruce Reitherman (Mowgli) in it as Christopher Robin as well), but Baloo is my favorite character in this film. I believe he was many people’s favorite… especially because Phil Harris (who always improvised half his lines) came back to voice more main characters in Disney animated films like Thomas O’Malley in The Artistocats and an almost carbon copy of Baloo as Little John in Robin Hood. That’s not to say that the other characters in this film aren’t just as compelling because I’ve stated on many occasions my love of Sterling Holloway (Kaa in this film but more famously known as the original voice of Winnie the Pooh and the Cheshire Cat). George Sander’s voice alone is what makes Shere Khan such an imposing figure and Louis Prima’s “I Wanna Be Like You” is my favorite song and scene in the entire film; however, Baloo has always been my favorite. Oh, and though she’s only a minor character in this film Verna Felton is certainly memorable. She’

s more recognizable for her roles in other Disney films like the Fairy Godmother in Cinderella and the Queen of Hearts from Alice in Wonderland but she played a number of other characters throughout Disney films. Like Walt Disney, she didn’t get to see the end result of The Jungle Book because she died a day before he did.

The Jungle Book boasts some of the best character animation the studio ever did and inspired many of the Disney animators of today on their career choice. This is animator Andre Deja’s favorite Disney film and the first Disney film he ever saw (he was the talent behind films like

The Lion King). By the time this movie was being made, the Disney company had started using the Xerox process which was essentially taking the animators drawings and transferring them to cels instead of redrawing everything by hand like it was done pre-One Hundred and One Dalmatians. “So from the early 60’s on, the animator’s drawings were then Xeroxed. It was a big artistic, graphic statement and Walt was not that crazy about One Hundred and One Dalmatians, the way it looked. It was a little too, I guess too artsy for him and the crew had to keep that in mind and by the time it came to Jungle Book they actually softened the look a little bit more. The backgrounds became again painterly like the earlier films. The characters had black lines, so Jungle Book was the one movie where you really had

My two favorite animators Ollie Johnston and Frank Thomas actually animated about 50% of this film. The “Jungle Book is a distillation of a long, rich friendship between Frank and Ollie, of a loving relationship between Woolie and his son Bruce, it’s desolations of the relationships of people in that studio, the lives they’d lived, the emotions they’d felt and they found a vehicle that they could really express all these things through.”

Mowgli: [sees the girl] Look. What's that?
Bagheera: Oh, it's the man-village.
Mowgli: No, no. I mean that.
Baloo: Forget about those, they ain't nothing but trouble.
Mowgli: Just a minute. I've never seen one before.
Baloo: So you've seen one. So let's go.
Mowgli: I'll be right back. I want a better look.
Baloo: Mowgli, wait a minute.
Bagheera: Oh, Baloo. Let him have a better look.


The History of The Jungle Book:


The Making of a Musical Masterpiece: