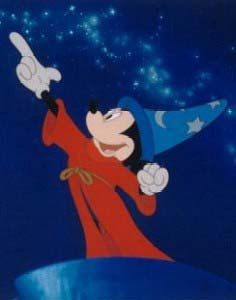 Walt Disney's most celebrated, most acclaimed and most requested film is finally here...

Fantasia! This extraordinary blend of magnificent music and classic Disney animation is an exhilarating sight and sound experience that has emerged as a milestone in the history of motion pictures. Featuring a host of unforgettable images, including Mickey Mouse as The Sorcerer's Apprentice, Fantasia has captivated generations of moviegoers all over the world.

The breathtaking beauty, electrifying power and very special magic of this timeless materpiece are now yours to enjoy in this meticulously restored version of the original, full-legth film. See the music, hear the pictures and share Walt Disney's greatest triumph... Fantasia!

Fantasia isn’t exactly one of my favorite Disney films but it is rather enjoyable. Be warned though, the music is so beautiful in some places that if it wasn’t for the gorgeous animation you would be asleep in 10 seconds flat! The most interesting (and the reason

why some people hate it) thing about this movie is that there is no spoken dialogue in the animated sequences, and all the stories are told through the music and the animation. Don’t let that stop you from seeing it if you haven’t before, true there is some partial nudity but Walt Disney wanted Fantasia to be more than just a film. He wanted it to be a work of animated art. 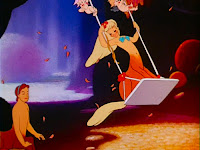 My favorite part of Fantasia is Beethoven’s Pastoral Symphony. It’s so gorgeous! There are Gods, Goddesses, cherubs, Pegasus’, unicorns, centaurs, and satyrs all throughout this amazing piece. Genuinely creative original works! The other part I like a lot is The Nutcracker Suite with all the pretty faeries and dancing flowers.

~ I have only seen the VHS. The 2-disc DVD is scheduled for release sometime in 2009. There is a 3-disc collector's edition but I've never seen it. 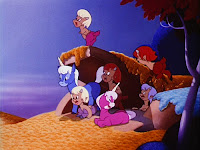 If you would like to see some footage that was cut from Fantasia go here to The Letterbox and Widescreen Advocacy Page and click the Multimedia link. Some of the footage from the movie is on YouTube.