The First In Death 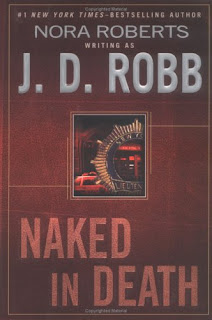 Eve Dallas is a New York police lieutenant hunting for a ruthless killer. In over ten years on the force, she's seen it all - and knows that her survival depends on her instincts. And she's going against every warning telling her not to get involved with Roarke, an Irish billionaire - and suspect in Eve's murder investigation. But passion and seduction have rules of their own, and it's up to Eve to take a chance in the arms of a man she knows nothing about - except the addictive hunger of needing his touch.

One of the most popular ladies to ever write romance, Nora Roberts had always wanted to try her hand at romantic suspense and nearly 15 years after her first published book she did with

Naked in Death, the first book in her longest running series to date. However, she published this new series under the name J. D. Robb and it wasn't until years later that it was acknowledged that Robb and Roberts was one person.

You know within the first couple of paragraphs that this isn't set in our present world and therefore will be an unusual story. There is some c 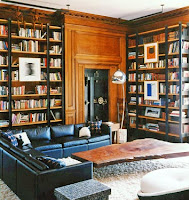 onfusing lingo too but that's to be expected since its set in 2058! In many ways, I find this futuristic world appealing but only if I were rich since a lot of what I take for granted now is expensive and hard to get in the future! There are many differences between our present day and theirs but they are so used to the way things are there that you only get little glimpses into what it’s like there. For example: real coffee is hard to come by because of the rain forest depletion and the affordable version is a simulation made mostly of vegetable concentrate. Small things mostly but I kept finding them fascinating!

The main difference though is that guns are now illegal (oh and tobacco is illegal too except in free air space, international waters, or on private property) and only found in museums, personal collections, and on the black market and it is the murder weapon in all of the killings.

"Is that why you collect guns? As part of your personal lifestyle?"
"I find them fascinating. Your grandfather and mine considered owning one a constitutional right. We've toyed quite a bit with constitutional rights as we've civilized ourselves."
"And murder and injury by that particular type of weapon is now an aberration rath 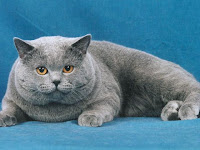 er than the norm."

Before I had even made it, halfway through Naked in Death I knew that this was a series worth reading. Eve was an interesting heroine and I really liked Rourke too. He's cool, a gentleman, and very, very interesting so I’m looking forward to seeing how their relationships progress in the rest of the books. I’ve read some of Nora Robert’s books before (my first one in 2005) but this was the first time I had read something under one of her pen names. I though that this book was very Nora Roberts but has more of an edge that makes it hard to fit into her normal repertoire.

Barnes and Noble Meet the Writers:


Picture Explanations:
Gun: Murder weapon, see above.
Library: Rourke has a huge collection of real books because in the future most reading material is on discs.
Cat: One of the murder victims owned a fat, grey cat and Eve ends up adopting it.