It Takes a Graveyard to Raise a Child 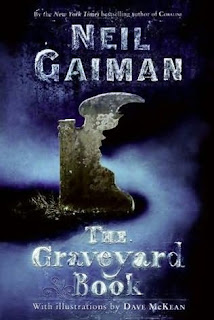 Nobody Owens, known to his friends as Bod, is a normal boy.

He would be completely normal if he didn't live in a sprawling graveyard, being raised and educated by ghosts, with a solitary guardian who belongs to neither the world of the living nor of the dead.

There are dangers and adventures in the graveyard for a boy-an ancient Indigo Man beneath the hill, a gateway to a desert leading to an abandoned city of ghouls, the strange and terrible menace of the Sleer.

But if Bod leaves the graveyard, then he will come under attack from the man Jack—who has already killed Bod's family. . .

"The Graveyard Book it's got scary bits, but it’s a very funny book. It's a very loving and warm
and friendly book with an awful lot of dead people in it. And it has vicious murders and sweet 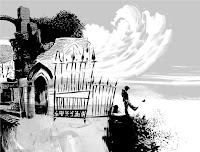 headstones and it has a long dead witch and it has a hero who I think is the best hero I've ever written. I love him and his name is Bod..." Neil Gaiman said of his Newbery Award winning novel.

This story was probably one of the best Newbery award winners I’ve ever read (or at the very least, in the top 5). It’s not spooky (despite the cemetery’s occupants-, which includes not only ghosts but other creatures as well), it’s not scary either. It’s entertaining, sweet, and occasionally funny. True, 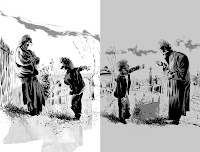 it’s kind of “dark” but it doesn’t come off that way at all despite the beginning. One of the reasons why I liked it so much is it is structured so that each story can be read almost entirely separately as although the main plot line is never compromised, just about every chapter is a new adventure (kind of like EB White’s Stuart Little, but it flows better). This would be a great story to read maybe just before bedtime (the chapters are a little long though).

There are several illustrations in the book by an illustrator named Dave Mckean that the author has collaborated with several times. Personally, I didn't really car 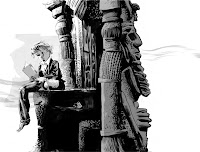 e one way or the other for the illustrations. To me they were just there (like Quentin Blake who did the illustrations for Roald Dahl, whom ironically Gaiman’s children literature reminds me of), not exactly pleasing to the eye but they conveyed the author’s story almost as if he had drew them himself. 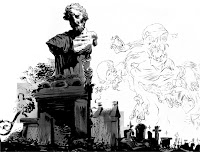 would be interesting to see Bod on his travels and whether or not if he ever makes it back to the graveyard where he grew up or if he ever finds out his birth name. In an interview the author said, "Children tend to read The Graveyard Book as an exciting sort of book with a hero they would love to be. Parents I think, tend to read it essentially as a giant metaphor for childhood and the joy and tragedy of parenthood," but all I know is that this was truly one of the finest books I’ve read in a long time and at the end I was left with tears and the strangest feeling... of wanting to read it again.


Visit msnbc.com for Breaking News, World News, and News about the Economy