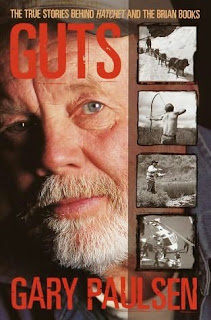 Here are the real events that inspired Gary Paulsen to write Brian Robeson’s story in Hatchet, The River, Brian’s Winter, and Brian’s Return: a stint as a volunteer emergency worker; the death that became the pilot’s death in Hatchet; plane crashes he’s seen and his own near misses. He takes readers on his first hunting trips, showing the wonder and solace of nature along with his hilarious mishaps and mistakes. He shares special memories, such as the night he attracted every mosquito in the county, and how he met the moose who made it personal. There’s a handy chapter titled “Eating Eyeballs and Guts or Starving: The Fine Art of Wilderness Nutrition”-- recipes included.

Readers of these hair-raising tales may wonder how Gary Paulsen survived to write his books and to tell these humorous stories on himself. Well, the answer is… it took guts.

Gary Paulsen has witnessed some horrific things in his lifetime and sometimes even been a part of them. Heart attacks, plane crashes, emergency landings (once where women and children on a plane that was forced to land in the 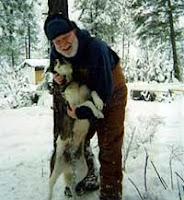 ocean and they were attacked by sharks near the ship 7 year old Paulsen was onboard), dog races, and even moose attacks. All of these events and more are included in the novella memoir Guts that the author wrote to answer the questions where he got his ideas for his survival stories, especially his Newbery Honor book Hatchet.

Some of his harrowing adventures make Brian’s almost look tame in comparison! As the author puts it, he was kind to Brian and the real kicker is that every sometimes funny, sometimes sickening, but always fascinating thing that the author talks about actually did happen to him. There were several I enjoyed reading (and some I didn’t- like the hunting chapters or when a deer killed a boy in a state park) but only two had me really laughing: when he was throwing the sled dogs in the bush plane to keep them out of the tail (so they wouldn’t crash) and they continued to come back, also when his team of dogs ran over a fresh water snapping turtle laying her eggs which resulted in the dogs being bit (and

them trying to climb the nearby trees), Paulsen being bit, and the sled upside down while the “cross between a T-rex and an alligator” walked off unharmed.

Imagine sitting around a table and just listening to an old explorer talking about his many adventures and you would have Guts. There isn’t really any order to the stories but to tell the reader how events in his life inspired him to create certain things in his Brian (and a few other) books. It’s a very laid-back collection of stories- more like a conversation among friends really.

All I can say is I’m never getting in a bush plane and I sure hope to never run into a moose either!

First Paragraph: Perhaps the single most catastrophic event in Brian's life in Hatchet is when the pilot dies of a heart attack. This forces Brian to fly the plane and land-- in little more than an "aimed" crash-- in a lake, where he swims free and saves himself.

Link:
A short biography and a full list of Gary Paulsen's published works are on Wikipedia.

The world suddenly changed-- and it was a sensation I would remember when I wrote Hatchet. With the dying of the engine every aspect of our flight drastically altered. No longer was the forest sliding by beneath us wonderful scenery; it had become a place that would try to wreck the plane, try to freeze us, try to starve us, try to end us.

At the first instant I didn’t realize that it was a large bull moose. He’d lost the previous year’s antlers and hadn’t grown new ones yet. I just saw brown. I saw big. I saw death coming at me, snorting and thundering. I think I may have thought of phantoms, wood spirits, wild monsters-- I most certainly did not think of moose.

Immediately behind me was a pine tree not more than six feet tall. It looked no different than other small pine trees, cute and well formed, like a little Christmas tree, but in that bull’s mind maybe the tree had done something to insult him, or gotten in his way, or called him out, because he absolutely destroyed that tree.

We have grown away from knowledge, away from knowing what something is really like, toward knowing only what somebody else *says* it is like. There seems to be a desire to ignore the truth in favor of drama.

Anybody who has heard a grouse take off will never forget it. Along with its freeze defense it has evolved a takeoff that is, to say the least, startling. The wings cup the air and beat at a tremendous rate, creating a concussive explosion so loud it sounds like an artillery round going off.
In this case, it was directly in my face. I almost wet myself. Then I fell backward, nearly somersaulting as the grouse flew past where my head had been and vanished into the dappled leaves.
Clearly, I thought, I am doing something wrong.

I’m not sure exactly when, but at some point in my youth, in the wild, I decided that if it didn’t grow or live in the woods I didn’t want it. For a considerable time, in a very real way, I lived not unlike Brian in Hatchet.

To learn, to be willing to learn how a thing works, to understand an animal in nature, or how to write a book or run a dog team or sail a boat, to always keep learning is truly wonderful.

When I set out to write the Brian books I was concerned that everything that happened to Brian should be based on reality, or as near reality as fiction could be. I did not want him to do things that wouldn’t or couldn’t really happen in his situation. Consequently I decided to write only of things that had happened to me or things I purposely did to make certain they would work for Brian.