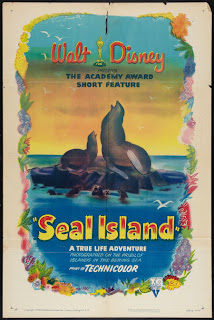 Tons of fanged and savage fury... fighting for a mate!

Mighty "Beach-master" and invading "Bachelor" clash in mortal combat... as the Arctic's strangest mystery unfolds before your eyes! First of Walt Disney’s “True-Life Adventures” Series. A live-action saga of nature in the Mystic Pribilof Islands.

“By special permission of United States Department of Interior Fish and Wildlife Service.”

The very first True-Life Adventure featurette was called Seal Island and it mostly features the mating and life cycle of the fur seal on the Pribilof Islands in Alaska which Walt Disney and daughter Sharon may have seen on their trip to the state the previous year. Narrated by Winston Hibler, this not quite 30 minute short won the Academy Award in 1949 for Best Short Subject (Two-Reel) and the Best Subject award at the Cannes festival. However, like many of Walt Disney’s brilliant ideas (adding sound to Steamboat Willie for example), he had to really do some fast talking to get anyone interested. RKO, the then Disney distributor, didn't want to take a chance on the film so Walt somehow got a theater in Pasadena to run the film to qualify it for the Academy Award. After it won, Walt was rumored to have said to his brother, "Here, Roy, take this [the Oscar] over to RKO and bang them over the head with it." 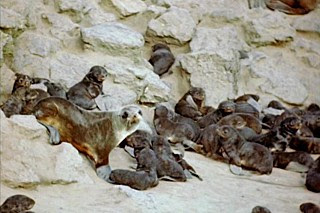 The idea for Seal Island and the eventual True Life series has become muddled with time. In some interviews, Walt Disney stumbled across Al Millotte in his camera store while visiting Alaska and asked him if he wanted to make pictures, another story goes that Walt Disney heard about the Millottes while they were in Seattle and sent them back to Alaska to see what they could get, and still another has Walt Disney taking credit for everything but the filming of the animals. Probably Elma Milotte's story is the most truthful in which they sent Disney some of the footage they shot of Alaska and he asked for more of the seals. They then filmed a ton of footage and cinematographer Alfred Milotte and the film editor Anthony Gerard pieced pieces of it together to come up with this short subject. The True Life Adventures; especially this first one, also helped the studio out financially because they grossed so much more than they cost to make. With very little animation (beautiful though it is), and no actors to pay, it pretty much just cost them the film and the money to pay the photographers.

At the beginning of the film, this appears on the screen: “This is one of a series of True- Life Adventures presenting strange facts about the world we live in. These films are photographed in their natural settings and are completely authentic, unstaged and unrehearsed.” In spite of this, to tell a coherent story, there is some manipulation of the film such as when a baby seal is supposedly lost yet you can see other seals around it when the mother "rescues" it and who knows? It may be another seal altogether! You don't really notice things like this when watching the film though. It does have anthropomorphic conventions to make the animals relatable to the viewer and some of the violence and deaths are softened as well too. 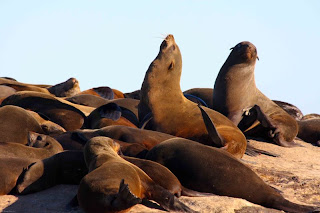 Other than a few basic facts, I didn’t know very much about the fur seal but boy are those “Beach Masters” some ugly brutes! Brute is an especially apt word when describing these animals since the climax of the film is a fight between two bulls, one Beach Master, one Bachelor (a male seal who has no harem of mates) and it does get a little bloody. The females and the pups were very cute though and it’s odd how their flippers really looked like hands and feet sometimes. Even if they weren’t a big part of this featurette, what I really liked was the birds featured on Seal Island, especially the penguins!

James Algar said that the True-Life Adventures were "based on the premise that information can be entertainment if interestingly presented.” However, there are no educators or scientist advisors for the film though there are three people credited as researchers, so not everything that is presented is necessarily true. Nor is all those sounds that the animals made what you’d actually hear in real life (the seals in real life sound a bit like sheep)… they are all special effects! There is actually no sound to any of the footage shot for any of the True- Life Adventures (the equipment wasn’t sophisticated enough back then to have both sound and picture and that‘s about the only “dated” thing in Seal Island) so it’s up to the sound effects guys and composers to make the film entertaining. Walt Disney received several awards for this and all his ’Adventure’ films such as being appointed as a member of the President's Committee on Higher Education and even a commendation from the National Geographic Society.

It’s behind this curtain of fog that nature plays out one of her greatest dramas. A story strange as fantasy, yet a story straight from the realm of fact. For this is a True- Life Adventure, the saga of the fur seal.

[Baby seal has caught his flipper under a bull or "Beach Master"]When 800 pounds of blubber has parked on your flipper, there’s not much you can do about it but wait until the big bully makes up his mind to move. Free at last. It's a hard life, this survival of the fittest.

Since there is no videos online for Seal Island, here are some seals!