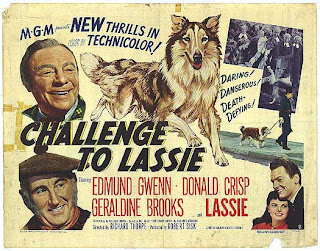 As a young pup in Scotland, Lassie grows to be an extraordinary sheep dog. But when her beloved master (Donald Crisp) is killed by beggars, the poor dog can only grieve at his grave.

Lassie soon falls victim to the law. Because she is without an owner, her fate is debated in an Edinburgh court. It is there her former master's friend, a tavern propertier (Edmund Gwenn) comes to Lassie's rescue, calling upon the court to spare this unusually kind and intelligent dog. 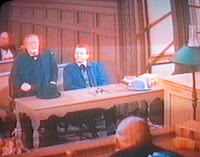 Author Eric Knight's faithful collie was first introduced in Lassie Come Home written in 1940. The story was soon adapted soon for MGM and Lassie became a big motion-picture star. In doing so that collie (As all of the films until 1951, Lassie is played by a male dog named Pal) became one of the most beloved animal actors in history. For the studio's sixth movie starring Lassie it was decided that Eleanor Atkinson's book Greyfriar's Bobby which was based 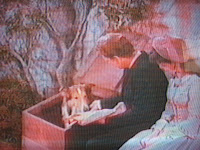 on a true story would be perfect material.

Challenge to Lassie does show its age in a few places but for the most part it's a beautiful film. Not quite as sad as some of the other adaptations of Bobby's story as it only ended with the court's decision with what to do with a dog without an owner or a license. 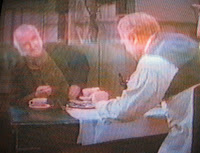 Maybe if I hadn't read Atkinson's book before I watched the film the fact that they replaced Bobby with Lassie wouldn't have bothered me at all. However, since I'm very familiar with the story it did annoy me at first but I soon was completely captivated by the story as they stayed very true to the book (and in some ways was even better than the book as you could actually understand what they're saying in the film!). 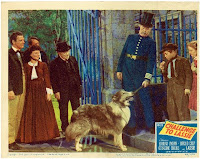 Lassie wasn't the only star in the film though the dog was the most famous. Kathryn Beaumont (probably most famous for being the voice of Alice in Disney's Alice in Wonderland and also Wendy in Disney's Peter Pan) plays a small uncredited role as one of the tenement children (probably meant to be Tammy from the book) too. This wasn't a highly proclaimed film, it didn't win any awards, nor was it very significant in the Lassie movie or show canon but though this collie never received a statue, it still has something in common with the character it plays: just like Bobby was belonged to everyone, Lassie did too.

Half Boy, Half God: All Hero 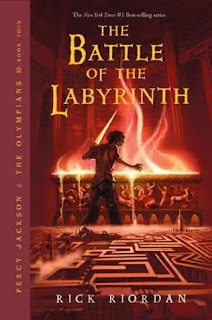 Percy Jackson isn't expecting freshman orientation to be any fun. But when a mysterious mortal acquaintance appears on campus, followed by demon cheerleaders, things quickly move from bad to worse.

In this latest installment of the blockbuster series, time is running out as war between the Olympians and the evil Titan lord Kronos draws near. Even the safe haven of Camp Half-Blood grows more vulnerable by the minute as Kronoss army prepares to invade its once impenetrable borders. To stop the invasion, Percy and his demigod friends must set out on a quest through the Labyrinth- a sprawling underground world with stunning surprises at every turn. Full of humor and heart-pounding action, this latest book promises to be their most thrilling adventure yet.

Retired teacher and bestselling author Rick Riordan’s fourth book The Battle of the Labyrinth is the next to last book in his Percy Jackson & the Olympians series. Like any good adventure series that involves quests and as this is the book right before the last one,

Percy, his friends, and even some his enemies face even more dire situations than ever before. Not as dark as its previous book The Titan’s Curse but there is a whole lot more action than usual.

In earlier reviews, after I read the first couple of stories in this series, I compared Percy Jackson’s adventures to Harry Potter a lot and although there are still a few strong similarities within this one too, it seemed like Riordan relied more on his own characters this time. Maybe since it has been so long since I’ve read Rowling’s hero but I believe Percy and his books are even more funny and engaging.

Another thing I’ve mentioned repeatedly is how very much I loved mythology when I was younger and although that love hasn’t faded (a minor reason why I love this series so much), anything other than vague memories of the myths have. I just love how

not only am I re-freshing my memory but I’m also learning along with the readers this is meant for. I have to admit that I’ve never heard of telekhines before and it’s very possible that the author made them up but I also thought that was one of the funniest scenes: “New lesson, class,” I announced. “Most monsters will vaporize when sliced with a celestial bronze sword. This change is perfectly normal, and will happen to you right now if you don’t BACK OFF!”

The Harry Potter series did a lot for reading, especially reluctant readers and I believe strongly that Percy Jackson’s series carries on that tradition. Which is one of the reasons I was sad to learn that this particular series is going to come to an end in the next book The Last Olympian. In an interview the author said, “[The kids] get really, really involved [when reading the series] and that's what's fun about it. I think that's what attracted me to teaching. It's the fact that you get to make such a difference when you're working with kids. You really do make an impact and you can turn kids into readers, maybe for the first time.” I’m not a kid Mr. Riordan, nor am I beginning reader, but I truly love your stories.
Percy Jackson and the Olympians
1. The Lightning Thief (2005)
2. The Sea of Monsters (2006)
3. The Titan's Curse (2007)
4. The Battle of the Labyrinth (2008)
5. The Last Olympian (2009)
Percy Jackson and the Olympians (omnibus) (2008)
The Sword of Hades (2009)

Related Posts: The Maze of Bones by Rick Riordan and One False Note by Gordan Korman
Links: Author Wikipedia, Series Wikipedia, Book Wikipedia, Author Blog, Fan Pop site, A Short Story between The Battle of the Labyrinth and The Last Olympian
Interviews: Scholastic, At Borders (video)

Picture Explanations
Daedalus Wings: In the myth Daedalus's son Icarus uses these but Percy and his friends use them with better results in the book
Pan: All satyrs have been looking for this God for centuries
Posted by Ladytink_534 at 4:14 PM 11 comments: Links to this post

"Seaweed Brain" to the Rescue! 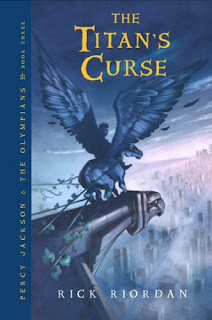 When Percy Jackson gets an urgent distress call from his friend Grover, he immediately prepares for battle. He knows he will need his powerful demigod allies, Annabeth and Thalia, at his side, his trusty bronze sword, Riptide, and . . . a ride from his mom.

The demigods rush to the rescue, to find that Grover has made an important discovery: two powerful half-bloods whose parentage is unknown. But that’s not all that awaits them. The Titan lord Kronos has devised his most treacherous plot yet, and the young heroes have just fallen prey.

They’re not the only ones in danger. An ancient monster has arisen—one rumored to be so powerful it could destroy Olympus—and Artemis, the only goddess who might know how to track it, is missing. Now Percy and his friends, along with the Hunters of Artemis, have only a week to find the kidnapped goddess and solve the mystery of the monster she was hunting. Along the way, they must face their most dangerous challenge yet: the chilling prophecy of The Titan’s Curse.

When he was a teacher, Rick Riordan "felt like [his] goal was to make reading fun"... "and as a writer [he] has the same mission," a mission that he has

accomplished with his young adult series Percy Jackson and the Olympians. Each book, Percy is a on a different quest with one common goal: he needs to save somebody. In the third book The Titan’s Curse, it’s his friend Annabeth and the goddess Artemis (also known as Diana).

Riordan’s series has become so popular because of three very important reasons: it's funny, there is tons of action, and it has a genuinely interesting premise. I do know quite a bit about Greek 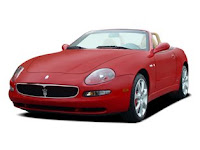 (and Roman) mythology but some of the things he presents in the stories are creatures I’ve never even heard of before, the Ophiotaurus for instance. I vaguely remembered the myth surrounding the creature but not the creature itself. Another thing I really love about these books is that whenever the heroes have to face a “Big Bad,” the author slowly builds up their introduction so his readers can guess what mythological being it is. More often than not I’m able recognize whom it is they’re up against but you’re never 100% certain.

Have I mentioned that these books are hilarious? It is getting a bit more dangerous and pe 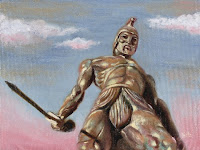 ople are starting to die in the series but even when the journey starts to look bleak, Riordan will throw in something like “It seemed weird calling a teenager “sir,” but I’d learned to be careful with immortals. They tended to get offended easily. Then they blew stuff up.” If that doesn’t at least make you smile, then some of the chapter headings will. Things like “Everybody Hates Me but the Horse,” “I Go Snowboarding with a Pig,” “I Wrestle Santa’s Evil Twin,” etc. I still don’t like the “wine dude” (Dionysus), and I have a problem with some of the other Gods too but I still can’t wait to see how this series turns out.

Picture Explanations
Black Pegasus: Percy saved him in a previous novel; his name is Blackjack (that’s him on the cover)
Maserati Spyder: Apollo’s updated sun chariot
Talos: A defective creation of Hephaestus
Posted by Ladytink_534 at 9:04 PM 9 comments: Links to this post