NOT a Fairy Tale 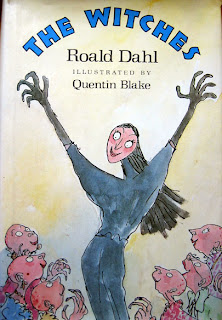 One child a week is fifty-two a year,
Squish them and squiggle them
And make them disappear.

THAT IS THE MOTTO OF ALL WITCHES.

When the young hero of Roald Dahl’s story is orphaned in an automobile accident, he is left in the care of his aged grandmother- a formidable lady who happens to be a retired witchophile, an expert on all witchy matters. Even though she tells him (and us) everything known about how to identify a witch, he accidentally wanders into the annual convocation of the witches of England. The meeting is presided over by none other than The Grand High Witch of the World, the most dangerous of them all. He overhears the horrifying plans she has in store for every child in England, but before he can escape to reveal the witches’ plot, he is captured and turned into a mouse. However, he is no ordinary mouse- and this is no ordinary tale.

True to his reputation as one of the most gifted and popular writers for children in the world, Roald Dahl tells the rollicking story of how a mouse-hero, undaunted by his diminutive stature, and his intrepid grandmother take on The Grand High Witch and her coven. 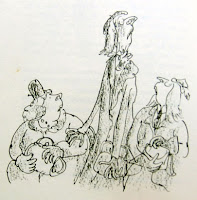 e the works of British author Roald Dahl (usually accompanied by the illustrations of Quentin Blake), especially his 1983 release The Witches. A frequently banned book (it’s actually on a list of the top banned books in America), Dahl’s story was nonetheless awarded the Whitbread’s Award (now known as the Costa Awards) for Best Children Book. The Witches was even made into a film in 1990 produced by Jim Henson and starring Anjelica Huston- whom Dahl himself had wanted for the role of the Grand High Witch.

No matter when the last time was that you read one of Roald Dahl’s books, it’s still incredibly easy to be swept up in his magical 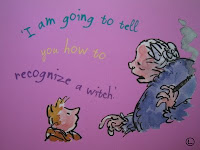 prose. I’m ashamed to admit that I had only read two of his wonderful stories before this book but I had enjoyed them both immensely and even though I was still very young when I first read Charlie and the Chocolate Factory and The BFG they continue to stick with me today… as I imagine The Witches will.

An amazing book- as the judges of the Whitbread Award were rumored to have described it as “deliciously disgusting,” and most decidedly dark as well. Some of that “darkness” can be contributed to Quinten Blake’s very

good and sometimes seriously creepy illustrations too. From time to time, they made me think that the unnamed kid in the book might have drawn them to illustrate his tale. The story just wouldn’t have been the same without Blake’s drawings.

“The banning of any book, you know especially a children's book, is unforgivable,” said Roald D

ahl in an interview after he was told that The Witches was being banned in some places. I do see why the book was banned because it would be frightening for some children as there are some scary moments that could even give them nightmares but I still don’t think it should ever have been censored. The “morals” alone in the book make it worth reading: “However nice they may seem, don’t talk to or take anything from strangers,” and the other one is even spelled out right in the story: “It doesn’t matter who you are or what you look like so long as somebody loves you.”