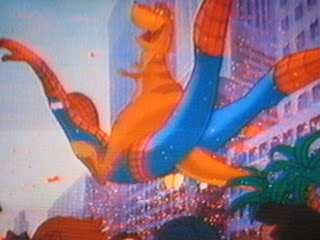 With his I.Q. boosting “Brain Grain” cereal, the time-traveling Captain NewEyes transforms Rex, Elsa, Dweeb, and Woog into thinking, feeling, talking, creatures. The four decide they want to meet their “biggest” fans- all the kids in the future who wish they could see a real dinosaur. So, faster than you can say “prehistoric”, Rex and his pals arrive and embark on the coolest adventure since the dawn of time!

Can these big-hearted dinosaurs rescue their young friends Louie and Cecilia from the clutches of NewEyes’ evil brother ScrewEyes? It’s up to Rex and company to prove that love, friendship, and kindness are always stronger than the power of fear. 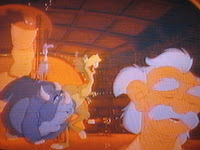 to), the animated film We’re Back! A Dinosaur’s Story is truly a fun and entertaining film. I never was much into dinosaurs when I was a kid (I liked fantasy more) but I did love Steven Spielberg’s We’re Back and all of his other animated Amblim films even though they have largely been forgotten today.

This film has a great mix of modern and traditional animation as well as some of the very best actors to do the voice work. My favorite though would have to be John Goodman who voices Rex. He just has that friendly, growly T-Rex kind of voice! I also liked how warm and welcome Captain NewEyes (voiced by Walter Cronkite) in direct contrast to his evil brother Professor 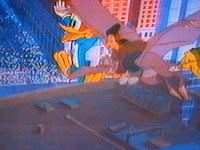 ScrewEyes (voiced by Kenneth Mars). It wasn’t until after I re-watched We’re Back recently that even realized that the same person (Yeardley Smith) who voices Cecilia Nuthatch is also Lisa on The Simpsons so that was really interesting too.

A lot of critics called this Jurassic Park Jr. when it first came out because of the obvious fact that its about dinosaurs and presented by Steven Spielberg (who directed Jurassic Park of course). There are even gags in the films itself including advertisements for the movie and a caricature of Spielberg wearing a Jurassic Park T-shirt in the Thanksgiving parade 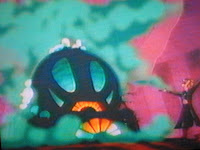 but you have to keep your eyes peeled because it goes by rather quickly!

There are quite a few animated films that feature dinosaurs even Spielberg has worked on others besides this (The Land Before Time) but none of them have the whimsical and yet very real uniqueness that this one does. I truly hope that one day the sequels that Hudson Talbott wrote to this are made into films as well.

I couldn’t find too much online about We’re Back except the Wikipedia and imdb.com articles of course.

visit videodetective.com for more info
Posted by Ladytink_534 at 10:39 PM