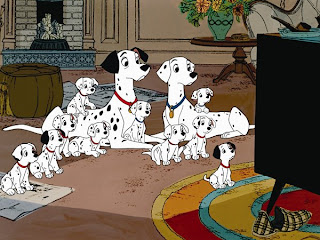 101 Dalmatians has charmed audiences for generations with its irresistible tail-wagging stars, memorable story and wonderful blend of humor and adventure.

Cruella De Vil, Disney’s most outrageous villain, sets the fur-raising adventure in motion when she dognaps all of the Dalmatian puppies in London- including 15 from Pongo and Perdita’s family. Through the power of the “Twilight Bark,” Pongo leads a heroic cast of animal characters on a dramatic quest to rescue them all in a story the whole family will enjoy again and again.

successful story by English writer Dodie Smith about a “dognapping case solved by dogs” in the most thrilling way possible. One Hundred and One Dalmatians has since become one of the most highly regarded of animated films.

After the tremendously expensive Sleeping Beauty, the Disney studio needed a box office hit but they also needed one inexpensively made. Thus the method of copying the animator’s drawings onto cels by hand had to be eliminated. Ub Iwerks is credited with finding a way to do this using a xerox machine which copied all of the animator’s 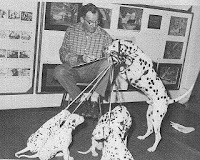 original drawings and that was what was painted. Instead of someone’s interpretation of an animator’s drawings like in the films before this you got the real thing and it drastically changed the look of the animated Disney movie.

I’ve always loved this intelligent, enjoyable, and innovative film. Every character is bursting with a personality, especially the devilish Cruella De Vil. She seriously is one of the scariest Disney villainesses ever drawn! With her exaggerated movements (and 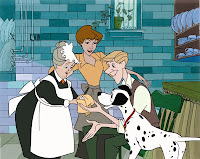 really big feet) she could have easily become too cartoonish to be real but Marc Davis proved himself a master with bringing her alive. He considered her his finest work and believed he couldn’t top her so he retired from animating and went on to work on the Disneyland attractions.

The Dalmatians (and their numerous spots) are one of the very few Disney creations that Disney created not only a sequel for (101 Dalmatians 2: Patch’s London Adventure) and a cartoon TV series but also two live-action adaptations both starring Glen Close and tons of real Dalmatian puppies. The second one is my favorite because it has even more animals 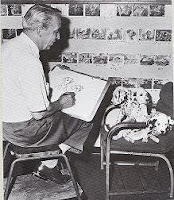 in it than usual (including the cutest bird named Waddlesworth).

When 101 Dalmatians was re-released in 1992, every kid I knew went crazy over the film. I’m positive that I had never even seen it before then either and I was just captivated by it. Looking back on that first time experience (when I was a few months shy of six years old) and now watching the new restored special edition for the first time, I’d have to say the captivation is pretty much the same!

More information about this movie (and it’s sequels and remakes) can be found on Imdb.com and Wikipedia. There is a page on Wiki about the 1956 book that the movie is based on and I also found some interviews about and from people who worked on 101 Dalmatians at Animated News. Redmorgankidd over on YouTube has the complete Making Of 101 Dalmatians available.