It Rises to the Occasion 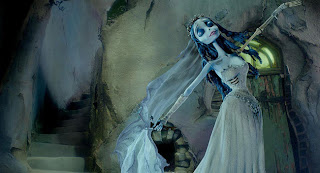 Tim Burton's Corpse Bride carries on in the dark, romantic tradition of his classic Edward Scissorhands and Tim Burton's The Nightmare Before Christmas.

Set in a 19th century European village, this stop motion, animated feature follows the story of Victor (voiced by Johnny Depp), a young man who is whisked away to the underworld and wed to a mysterious Corpse Bride, while his real bride, Victoria, waits bereft in the land of the living. Though life in the Land of the Dead proves to be a lot more colorful than his strict Victorian upbringing, Victor learns that there is nothing in this world, or the next, that can keep him away from his one true love. It's a tale of optimism, romance and a very lively afterlife, told in classic Burton style.

Tim Burton is a man the word “creepy” is synonymous with and The Corpse Bride only solidifies that fact. True, it is a bit gruesome at times but the songs and the personalities of the characters

shine through so strongly that it’s impossible to dislike this wonderful film.

A lot like Nightmare Before Christmas but even better, this is a stop-motion animated film that just happens to be a kind of macabre reunion of all Burton’s favorite people he’s worked with like Johnny Depp (Victor), and Helena Bonham Carter (Emily, the Corpse Bride) whom he is now actually married to.

The animation is awesome of course (clay figures like Nightmare Before Christmas) but it's really the music that moves the movie along. Danny Elfman and Tim Burton's styles mesh together well. Elfman is the creator of this hauntingly beautiful, jazzy soundtrack. My favorite song would have to be Tears to Shed but the one that I think is the most fun and show how lively the dead really are is Remains of the Day. Just like Tim Burton has a very recognizable look to his films, Elfman’s

sound is incredibly unique and what makes him one of my favorite composers of today.

While this movie is still a little gross, even gruesome at times and certainly macabre, it still somehow is manages to be kid-friendly and yet adults can enjoy it as well. I think Tim Burton himself describes it best: "Rather than make [death] this dark, unspoken thing -- which is kind of how I grew up -- I always liked the idea that it was more a celebration. It feels more positive, somehow, and more spiritual and right to me," he said.