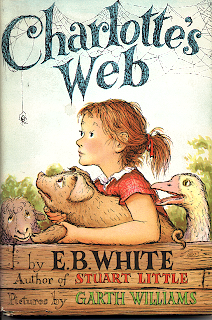 This is the story of a little girl named Fern who loved a little pig named Wilbur- and of Wilbur’s dear friend Charlotte A. Cavatica, a beautiful large grey spider who lived with Wilbur in the barn. With the help of Templeton, the rat who never did anything for anybody unless there was something in it for him, and by a wonderfully clever plan of her own, Charlotte save the life of Wilbur, who by this time had grown up to be quite a pig.

How all this comes about is Mr. White’s story. It is a story of the magic of childhood on the farm. The thousands of children who loved Stuart Little, the heroic little city mouse, will be entranced with Charlotte the spider, Wilbur the pig, and Fern, the little girl who understood their language.

The forty-seven black and white drawings by Garth Williams have all the wonderful detail and warm-hearted appeal that children love in his drawings for Stuart Little.

Imagine, crying over a spider’s death! A creature generally disliked by mankind and yet one 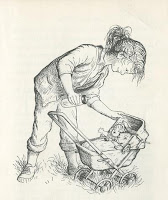 children’s book author made millions of children the whole world over cry for her. That author would be E.B. White and that spider would be his famous Charlotte A. Cavatica from his book Charlotte’s Web. His story of a spider who befriends and saves the life of a pig named Wilbur won many awards over the years including the Massachusetts Children's Book Award in 1984, the Laura Ingalls Wilder Medal in 1970, and it became a Newbery Honor Book the following year it was published. 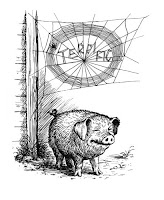 Charlotte’s Web has also been adapted to the screen once in 1973 as an animated film by Hanna-Barbera Productions and recently in 2006 as a live-action film starring Dakota Fanning and several other Hollywood stars. The animated version with songs written by the Sherman Brothers, was where I first heard this heartwarming story but it was years later before I realized it was based on a book. This was probably my third time re-reading this particular book by White (I’v 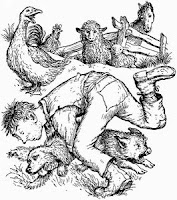 e only read Stuart Little and The Trumpet of the Swan once a piece) and if possible, I believe I love it more with each reading. Written for children it may be, but it is still adored by adults as well.

The first pig the author wrote about was in a short story called Death of a Pig that appeared in the Atlantic Monthly but having failed to save that pig, “since literature is not life, White set out in "Charlotte's Web" to save his pig in retrospect.” A beautifully sad story with si 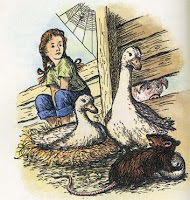 mple, yet very appealing illustrations, this is one of my absolute favorite children’s books. Why is a spider such a beloved character? Especially since "The spider in the book is not prettified in any way?" She’s talented, smart, loyal, “a true friend and a good writer” too. "I came out ahead," White wrote, "because of not trying to patronize an arachnid."

When asked if his stories are real, White replied, “No, they are imaginary tales, containing fantastic characters and events. In real life, a family doesn't have a child who looks like a mouse; in real life, a spider doesn't spin words in her web. In real life, a swan doesn't blow a trumpet. But real life is only one kind of life -- there is also the life of the imagination. And although my stories are imaginary, I like to think that there is some truth in them, too -- truth about the way people and animals feel and think and act.”