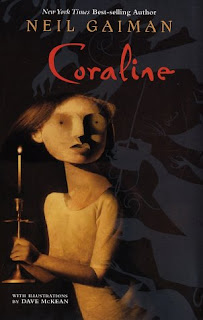 The day after they moved in, Coraline went exploring . . .
In Coraline's family's new flat are twenty-one windows and fourteen doors. Thirteen of the doors open and close.

The fourteenth is locked, and on the other side is only a brick wall, until the day Coraline unlocks the door to find a passage to another flat in another house just like her own.

At first, things seem marvelous in the other flat. The food is better. The toy box is filled with wind-up angels that flutter around the bedroom, books whose pictures writhe and crawl and shimmer, little dinosaur skulls that chatter their teeth. But there's another mother, and another father, and they want Coraline to stay with them and be their little girl. They want to change her and never let her go.

Other children are trapped there as well, lost souls behind the mirrors. Coraline is their only hope of rescue. She will have to fight with all her wits and all the tools she can find if she is to save the lost children, her ordinary life, and herself.

Critically acclaimed and award-winning author Neil Gaiman will delight readers with his first novel for all ages.

“You know I love you,” said the other mother flatly. “You have a very funny way of showing it,” s

aid the heroine from Neil Gaiman’s story Coraline. This Bram Stoker Award (for Best Work for Young Readers) and the Hugo and Nebula Award for Best Novella winning novel took the author nearly ten years to write but although written as a young adult novel, this is a story that can appeal to everyone. It has been adapted into a graphic novel, a stop-motion animated film, and in May 2009 it became a musical as well.

Coraline was a good story, not a wonderful story- nor even quite as good as Gaiman’s newest children’s story The Graveyard Book but I enjoyed it. Like his Newbery-winning book, this one has dark undertones too but even

though there is a murder at the beginning of the other book, this still manages to be a little bit scarier. As Coraline herself says, “after all, it is always easier to be afraid of something you cannot see.” The other mother and all of the inhabitants that were created in the world behind the door, hardly ever show you their true face and when they do… well, let’s just say you really wish they hadn’t!

I am looking forward to seeing the stop-motion animated film adaptation soon now and I have really high hopes for it. There are quite a few “scenes” I’d love to see how they translate to the screen. In an interview, Gaiman admits that after seeing The Nightmare Before Christmas, he had stop-motion in mind as the form Coraline should be portrayed because if they used live-action “it would be like The Shining for kids. Whereas the fact that these things are not quite real--they're dolls--allows everything to mute down.” At times while reading the story, I’ll admit that I imagined it as a mix between real world and sort of stop-motion even though I haven’t seen the movie yet.

Adventures in Wonderland and Through the Looking Glass by Lewis Carroll and also C.S. Lewis’ world of Narnia but where those books are charming, this one should not be mistook as anything except what it is: a work by the brilliant Neil Gaiman. It has more a dark fairy tale flavor to it, like something you would find in maybe an old Goosebumps book or something by Tim Burton (especially the really creepy rats). Lemony Snicket said it best I believe when he said that Coraline is “a fascinating and disturbing story” and while it didn’t “frighten me nearly to death,” I still am doubtful that I would want to explore any locked doors that go to “Nowhere” any time soon! Coraline was partly a scary story, partly an adventure, “and partly just a magnificent romp.”