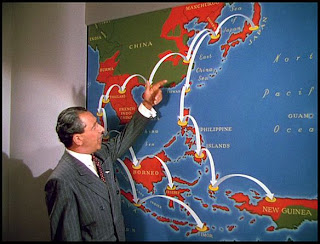 This World War II film, meant to send a message rather than entertain, is adapted from a book by Russian-born Major Alexander P. de Seversky. It starts out with a brief but interesting history of airplanes, starting with the Wright Brothers' first flight in Kittyhawk. We see aviation being explored by various nations for various purposes and then airplanes put to limited use in World War I, followed by a series of successes in flight, before finally moving on to World War II. The film talks about the history of Major de Seversky, who later explains about how the advent of aircraft spells change in the face of traditional warfare. It then goes on to explain how the Allies chose not to embrace the use of air power and instead, used old-fashioned methods of warfare to battle the Axis powers, who used aircraft to do their dirty work. The point the film makes is that the only way for the Allies to secure victory over the robust Axis is to make heavy use of military aviation, because, as we're told, fighting on the surface puts the advantage in the hands of Adolf Hitler. ~ From Wikipedia 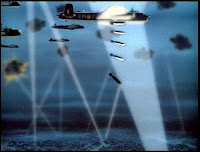 Power. It was the very first Disney theatrical release that featured not only animation but also live-action too. The film is based on the (then) controversial book of the same name by Alexander P. de Seversky which was published shortly after the attack on Pearl Harbor.

Unfortunately, it’s also the only Disney movie I’ve ever seen that’s not only dated but is actually kind of boring too. I think the only people that this educational film could hope to appeal to are history buffs and seriously devoted Disney fans. Because Air Power was put together in such a 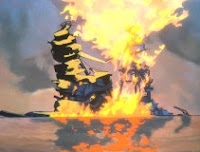 hurry, not even the animation could redeem this film for me. To put it bluntly: I was bored and had to make myself watch the last 30 minutes.

That’s not to say that maybe for it’s time it was good but I only watched it because the Disney name was attached. To me it seemed like one long lecture but I’m sure there were many people back then that the message impacted but I just didn’t care for it.

~You can now buy this film in the Disney Treasure’s DVD: On the Front Lines anthology along with other propaganda shorts such as Der Fuehrer’s Face and Donald Gets Drafted (that are much more interesting).