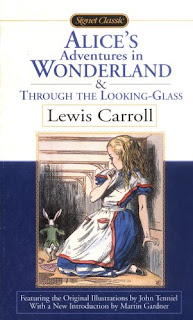 Weary of her storybook, one "without pictures or conversations," the young and imaginative Alice follows a hasty hare underground-- to come face-to-face with some of the strangest adventures and most fantastic characters in all of literature. The Ugly Duchess, the Mad Hatter, the weeping Mock Turtle, the diabolical Queen of Hearts, the Cheshire Cat-- each more eccentric than the last-- could only have come from that master of sublime nonsense, Lewis Carroll. In penning this brilliant burlesque of children's literature, this farcical satire of rigid Victorian society, this arresting parody of the fears, anxieties, and complexities of growing up, Carroll was one of the few adult writers to enter successfully the children's world of make-believe, where the impossible becomes possible, the unreal, real, and where the heights of adventure are limited only by the depths of imagination.

In 1862, a man named Reverend Charles Lutwidge Dodgson, a friend of his who was also a r

everend and three little girls took a boat ride where Dodgson began to tell them a story to keep away boredom. It was a story of a little girl named Alice (one of the girls on the boat ride shared this name) who falls down a rabbit hole into a strange Wonderland. This man of course was later to become better known as Lewis Carroll and his story was one he shared with the world three years later called Alice’s Adventures in Wonderland. Then six years after it’s amazing success, a sequel called Through the Looking Glass (and What Alice Found There) was published although nowadays they’re often presented together as one. 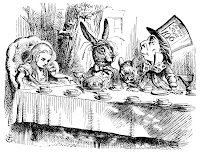 Poor Alice! "How puzzling [Wonderland] is!" Yet, this nonsense world is amazing and wonderfully fantastic as well. With many classic stories, Walt Disney was my introduction to this brilliant story and even though it is a loose adaptation of Carroll’s work, it is still one of my very favorite Disney films; however, the film just cannot compete with the book. Alice’s Adventures in Wonderland and Through the Looking Glass is a classic that I have been reading and re-reading almost my entire life and I’m glad to say that I still love it. Each time I

have re-read the story, it is a bit like reading it for the very first time. Mainly because of my memory but also because there are deeper meanings (after all the author was a mathematician), word play, and other things hidden in this story's pages too that I understand a bit more the older I get.

Lewis Carroll’s Wonderland is a creative and beloved tale and “his facility at word play, logic, and fantasy has delighted audiences ranging from children to the literary elite, and beyond this his work has become

embedded deeply in modern culture, directly influencing many artists.” This book will probably never be forgotten as authors write new books every day (such as Frank Beddor’s Looking Glass Wars trilogy) inspired by it or film adaptations are made again and again (though the most famous of these is still Disney’s animated version).

Whimsical, “literary nonsense”, or however you want to categorize these stories, there is no denying the fact that they hardly seem to age at all. So:

Thus grew the tale of Wonderland
Thus slowly, one by one,
Its quaint events were hammered out -
and now the tale is done,
And home we steer, a merry crew,
Beneath the setting sun.