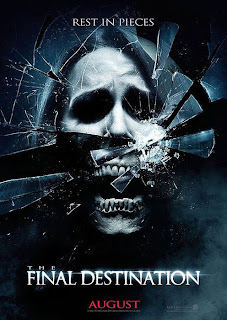 The movie series that taps into your deepest fears returns with a new and imaginative chapter that delivers the expected - in so many keep-you-guessing, unexpected ways! A strange premonition causes friends to abandon their day at the speedway, just before a crushing pileup hurtles cars into the bleachers with fiery consequences. They have cheated Death. But Death is only getting started. From the director of Snakes On A Plane comes the eerie, innovative tale of the friends' fierce fight to keep themselves and others alive.

Originally written to be an X-Files episode, the Final Destination franchise has come a long way

since the first film with Devon Sawa and the Flight 180 plane crash that sparked the series. Using new 3D technology, The Final Destination still somewhat follows the rules set up in the previous movies which was such a hit because “it's not a typical horror movie. It's not zombie. It's not being chased after with a mask and a knife. It's death. It's something that's intangible. You can't figure it out. There's no rules, nothing.”

but I thought it was unrealistically gory (almost B-movie at times) and more time seemed spent on making it 3D than on making a good, or at least decent horror sequel. The acting was also completely forgettable. Almost all these actors are actually TV actors who have small bit parts for one episode and that’s it (Bobby Campo who plays the guy who gets the visions actually just appeared on CSI: Miami). The only really redeemable actress is Shantel VanSanten and she’s a repeat character on One Tree Hill. It’s not really their fault that they don’t have too much experience but because the producers went with mostly unknowns it stopped the film from being over stylized which would have made me hate it instead of merely disliking it.

The Final Destination wasn’t a completely horrible film, it even had a few good parts but in my opinion I believe it’s the worst in the Final Destination franchise. I do like the Final Destination movies or at least I did, but I believe it has started being run into the ground (thankfully according to one of the producer’s this is supposedly the final Final Destination though he does mention the fact that he has an idea for a fifth one) and it’s more about grossing you out than scaring you. I appreciate that the writers tried to be a little different while sticking to the canon as much as possible, however it’s become so predictable that the only high note of the film was how it ended.