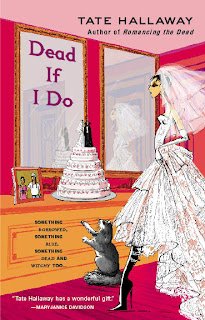 I’ve finally found Mr. Right. Sure, he might not have a pulse, but as a girl who’s sharing a body with a short-tempered Goddess, I’m not one to judge. Sebastian is the vampire of my dreams, and I’m dying to walk down the aisle. Everything couldn’t be more perfect.

Well, except for the fact that the awesome band I hired for the reception has been replaced by some guy with an accordion and lederhosen. And the bridesmaid’s dresses somehow got switched to salmon-pink taffeta with butt-bows. Not to mention the fact that Sebastian’s ex-lover, the zombie-slash-vampire-slash-witch who just happens to be the mother of his undead son, wants both of us six feet under. Now I know why some girls turn into Bridezillas.

Weddings are tough on the nerves and can make even the most mild-mannered woman into a dreaded Bridezilla but try planning a wedding when you’re cursed. Garnet Lacey; the perky goth witch who harbors the goddess Lilith (“Used to be, if I accidentally triggered Lilith’s wrath, I could wake up to find myself with bodies to bury, literally. Now I

was conscious during the outbursts, and she was easier to rein in… at least so far.”) inside of her from the series by Tate Hallaway, is finally getting married to her longtime boyfriend Sebastian Von Traum in the fourth book Dead if I Do.

Garnet and Sebastian have come a long way since their first appearance in Tall, Dark and Dead (published in 2006) and it just wouldn’t be them unless everything that could possibly go wrong does for their wedding. We finally meet the Garnet’s estranged hippy parents as well as the mother of Mátyás (Garnet’s soon-to-be son-in-law) who just happens to be a zompire (a zombie/ vampire/ witch) now and besides the cursed the wedding plans, Te

reza is the Big Bad in this book. There was quite a bit that I found creepy during this book, especially the parts with Tereza since technically Garnet is the other woman (even if she was never married to Sebastian), fiancé or not and to be honest, it made me uncomfortable at times.

That’s not to say that this isn’t a fabulous addition to the series because it definitely is (oh, I love the author’s description of the goddess Athena) and it still has that lighthearted comedic value in between attacks by the crazed Tereza too. I was so happy to see that the resident bad boy ex-boyfriend in this series Parrish shows up quite a bit. I’ve always liked him better than any of the other characters (besides Garnet of course). Dead if I Do is the second-to-last book in the Garnet Lacey series, the final story being Honeymoon of the Dead and I can’t wait to read it.

First Sentence: Introducing your fiancé to your parents for the first time is always tough, but when you add that he’s a vampire…?

DON’T FORGET TO CHECK OUT THE INTERVIEW I DID WITH THE AUTHOR LAST YEAR!
Source: Special thanks to the publisher!

Picture Explanations
Barn: A creepy place but better than the malevolently haunted basement!
Blizzard: It’s December in Wisconsin, of course there’s going to be a blizzard
Posted by Ladytink_534 at 5:53 AM