It Still Hasn’t ‘Cracked Up’ 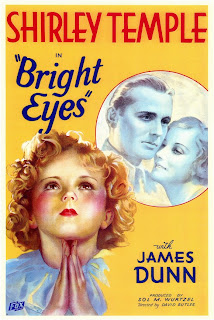 The first big film created especially for her, Bright Eyes helped make Shirley Temple a huge box office star and features her most famous song: "On the Good Ship Lollipop."

The little darling of a group of aviators, Shirley splits her time between her pilot godfather Loop (James Dunn) and her long-suffering mother (Lois Wilson), housemaid for a selfish, wealthy family. When a tragic accident leaves Shirley orphaned, Loop sets out adopt Shirley- until he learns he's not the only one determined to keep the adorable youngster.

just about everyone adores. This wasn’t the first nor certainly not the last where she plays an orphan either. It’s quite a common plot device for some of Temple’s films but they’re all unique in their own right. James 'Jimmy' Dunn once again plays opposite of little Shirley for the third and final time in Bright Eyes. Their previous two films together were Baby Take a Bow & Stand Up 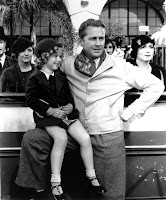 and Cheer but this one is by far their best. Temple’s trademark song On the Good Ship Lollipop (which actually takes place on a grounded plane) was first performed during this picture too.

Written mainly as a vehicle for Temple's rising status, Bright Eyes had an incredible cast of supporting actors and actresses too. Dunn, who plays the aviator Loop Merritt, has a real dynamic with Shirley in this picture that was missing from their previous 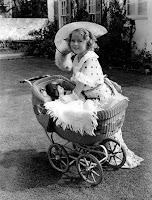 encounters onscreen and the old curmudgeon Uncle Ned Smith (Charles Sellon) was simply delightful as well. Jane Withers nonetheless shines as the resident 'mean girl' (more like little monster… and her parents aren‘t too much better either) Joy Smythe in the film. She kept the film from being saccharinely sweet while at the same time making her co-stars look better (or at least better behaved!).

As a matter of fact, Bright Eyes was Withers’ breakout role and though she never starred in (or in this case, alongside) a big budget picture again, she still had an incredibly successful career i 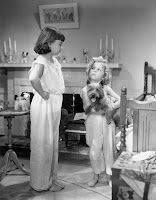 n lower budgeted films. Someone else was recognized in this film as well and went on to become a bit of an icon and that was the dog Rags. She is better known as Toto from MGM's Wizard of Oz but this is where the little dog got her start in film!

Besides good actors and a hit song that was listed on AFI’s 100 Years 100 Songs, Shirley Temple was awarded a miniature Academy Award (the first received by a child actor) in 1935 partly for her role in this film. Her crying scene after she finds out her mother has “cracked-up” (died) alone could be credited for that honor. By the time this film was released, Temple was a household name and everyone flocked to see this and that is the main reason Bright Eyes is still known today however, it’s still a great watch for the adorableness of Shirley.