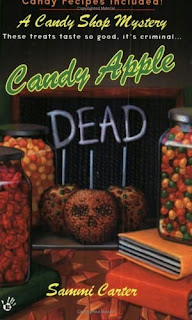 No visit to Paradise, Colorado is complete without a stop at Divinity Candy Shop for a little taste of heaven. For owner Abby Shaw, it's a sweet deal, too. When her Aunt Grace passed away, Abby inherited Divinity-- and with it the opportunity to leave her career as a corporate lawyer and dump her cheating husband. Now she spends her time serving up delectable treats-- and performing the occasional deductive feat...

Making and selling sweets eases Abby's heartache, but having Brandon Mills sweet on her eases it even more. The owner of a men's clothing store, he invites Abby to the local merchants' meeting where he'll plead his case to extend the city's annual arts festival. And then he wants to cap off the night with a romantic dinner for two.

But Brandon never shows. His store is destroyed by fire and his body is discovered in the rubble-- and Abby is shocked to find that few people in town mourn his death. Paradise's business owners were threatened by Brandon's ambitious nature-- and several men felt threatened by the attention he showered on their wives. And when her brother becomes the number one suspect, Abby holds her own investigation to find out who really killed Brandon-- for love or money... 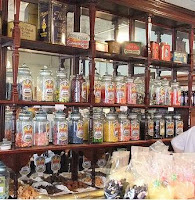 “sugarcoat [her] words when [she’s] upset.” Candy Apple Dead is the first book in this series, which was inspired by a real-life experience of the author's when a friend had been "found dead inside his men's clothing store after an explosion and fire." However, every thing and everyone else in Paradise is a "figment of [the author's] overly fertile imagination" and "the ultimate solution isn't even close to reality." Ms. Carter says, "The circumstances of my friend's untimely death served only to provide the catalyst for me to start doing what (according to my mother) I do best--making things up."

We learn everything we need to know about the main character in the first few pages: she’s divorced from her cheating husband and has moved back home to a town called Paradise. Recently she inherited her mother’s aunt’s candy shop when she had died and is trying to keep the business going successfully… oh and she has a bit of a temper. Nothing all that new in the way of a cozy culinary mystery and automatically I was reminded of Joanne Fluke and JoAnna Carl which unfortunately continued through most of the book, but it still somehow

remained unique. I believe this was mainly because of the characters but also through the idea of an ex-lawyer candy-maker turned amateur sleuth.

The setting of this series reminded me of JoAnna Carl’s little Warner Pier where her heroine Lee helps her aunt run a gourmet chocolate shop though I believe I actually prefer this store more: “Thanks to Aunt Grace’s dramatic sense of style, Divinity occupies a graceful old building that dates back to the earliest days of Paradise’s history. Originally the territorial jail, the building is filled with enough cubbyholes, nooks, and crannies to stir anyone’s imagination. The store and kitchen take up the entire first floor. Storage rooms and a large, airy meeting room-- a courtroom during much of the nineteenth century-- occupy the second level, and my apartment is on the third floor.” I especially was enamored with the “seasonal display window made entirely of candy.” How neat is that?!

Abby herself however reminded me a bit of Joanne Fluke’s Hannah Swensen, though only in a subtle way. Mostly in her sleuthing techniques and the fact that she constantly has a police officer on her tail:
Karen: “’That policeman isn’t going to like you snooping around.”
Abby: “Well I don’t like him accusing my brother of murder,” I said, heading toward the refrigerator, “so I guess that makes us even.”
Karen: “Oh you’re even all right. Except he’s the one with handcuffs and keys to the jail. That tilts the scales in his direction just a little.’ ” 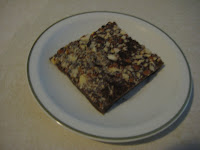 The heroine and her cop and their banter makes up a good percentage of why I enjoyed Candy Apple Dead so much. The other of course is learning more about candy making and how a candy shop is run. Not to mention the yummy candy itself! I dare you not to start craving something sweet while reading this story, especially when the author throws in something like this: “If you’ve never had a homemade marshmallow, you don’t know what you’re missing. It differs as much in taste and texture from the store-bought variety as milk chocolate from dark. In ancient Egypt, marshmallow was made by squeezing sap from the mallow plant and mixing it with nuts and honey. It was considered such a delicacy that it was reserved for gods and royalty-- a far cry from today when we pass out handfuls to kids so they can incinerate them over campfires.” Needless to say, I was very impressed with this first book in Sammi Carter’s series and I plan on picking up Chocolate Dipped Death soon.

First Paragraph: "I swear, darlin' " Brandon Mills said in a sexy Texas drawl edged with sugar, "this fudge of yours is going to turn me into a butterball."

Picture Explanations
Candy Shop: From the descriptions in the book this is sort of what I imagined the Divinity Candy Shop to look like.
Doberman Pinscher: Brandon's dog Max who becomes an essential part of the plot.
Divine Almond Toffee: Aunt Grace's toffee from the recipe in the book.