It Won't Let Them Go Easily 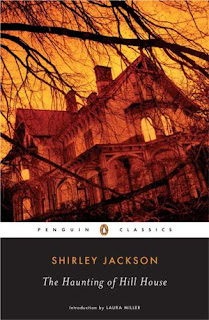 Past the rusted gates and untrimmed hedges, Hill House broods and waits...

Four seekers have come to the ugly, abandoned old mansion: Dr. Montague, an occult scholar looking for solid evidence of the psychic phenomenon called haunting: Theodora, his lovely and lighthearted assistant; and Luke, the adventurous future heir of Hill House. At first, their stay seems destined to be merely a spooky encounter with inexplicable noises and self-closing doors, but Hill House is gathering its powers and will soon choose one of them to make its own...

Acclaimed by many to be "one of the most frightening books ever written", Shirley Jackson's The Haunting of Hill House is probably one of the most well-known haunted house stories and yet there isn’t any actual known ghost in Hill House. It’s just a story about a house, albeit “It was a house without kindness, never meant to be lived in, not a fit place for people or for love or for

hope. “Essentially, the evil is the house itself, I think. It has enchained and destroyed its people and their lives, it is a place of contained ill will.” Other times the house is described as “Leprous. Sick. [Or] any of the popular euphemisms for insanity; a deranged house is pretty conceit.”

Doctor Montague’s description of Hill House’s slight off-ness of its angles is probably one of the best ways to describe how I felt about the story. When one of the characters says: “Then everything is a little bit off center?” Theodora asked uncertainly. “That’s why it all feels so disjointed?”, I immediately agreed with her. It took me quite awhile to actually finish the story because it continually kept me off-balance and not in a good way either, especially toward the end. At first everything was progressing nicely and then slowly Eleanor and Theodora started to change personalities without hardly any warning at all (although I‘m still not sure if Theo‘s personality switch was something Eleanor imagined or not…) . Regardless it was unsettling and confusing too.

All of this doesn’t mean that The Haunting of Hill House is a bad story or that it didn’t have some scary moments especially when the house really stops “biding it’s time” and starts to mess with the current occupants. Probably one of the most memorable parts (in the movie adaptations as well) is w

hen it tricks the doctor and Luke into going outside and precedes to as Theo puts it: “Someone knocked on the door with a cannon ball and then tried to get in and eat us, and started laughing its head off when we wouldn’t open the door.” That was extremely creepy or another time when “Hill House went dancing,” Theodora said, “taking us along on a mad midnight fling. At least, I think it was dancing; it might have been turning somersaults.”

Images from the two film adaptations continually intruded while I was reading but they helped somewhat in visualizing the evil of Hill House. However, they also hindered quite a bit as I couldn’t just sit back and read, I had to try and figure out what was going on. There really was no answer to that which is what really disappointed me. What is wrong with Hill House? The 1999 film tried to explain it (unsuccessfully, I might add) but the book doesn’t even attempt it which I found incredibly annoying as I so wanted Hill House to give up its secrets and I ended up being disappointed with the ending too. I can’t deny that it is a powerful story though. Stephen King was obviously influenced greatly by it as several things make it into some of his books and Jackson’s story was even nominated for the National Book Award in 1960 too.

First Paragraph: No live organism can continue for long to exist sanely under conditions of absolute reality; even larks and katydids are supposed, by some, to dream. Hill House, not sane, stood by itself against the hills, holding darkness within; it had stood so for eighty years and might stand for eighty more. Within, walls continued upright, bricks met neatly, floors were firm, and doors were sensibly shut; silence lay steadily against the wood and stone of Hill House, and whatever walked there, walked alone.

Picture Explanations
Hill House: The 1960 film adaptation’s version of Hill House is the closest to the novel one.
Planchette: Mrs. Montague uses this to “communicate” with spirits.
Posted by Ladytink_534 at 5:40 PM