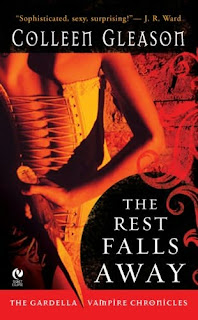 Vampires have always lived among them, quietly attacking unsuspecting debutantes and dandified lords as well as hackney drivers and Bond Street milliners. If not for the vampire slayers of the Gardella family, these immortal creatures would have long ago taken over the world.

In every generation, a Gardella is called to accept the family legacy, and this time, Victoria Gardella Grantworth is chosen, on the even of her debut, to carry the stake. But as she moves between the crush of ballrooms and dangerous moonlit streets, Victoria’s heart is torn between London’s most eligible bachelor, the Marquess of Rockley, and her duty. And when she comes face-to-face with the most powerful vampire in history, Victoria must ultimately make a choice between obligation and love…

There have been vampire hunters since the first whispered stories about those blood-drinking creatures of the night. However, they weren’t too popular in fiction until Professor Van Helsing from Bram Stoker's Dracula came al

ong. Several authors were inspired by his plight but only one has become nearly as popular and only after being adapted into a TV show starring Sarah Michelle Gellar. That show was Buffy: The Vampire Slayer and it had a major hand in helping kick off the urban fantasy/ paranormal genre of late. Author Colleen Gleason decided she wanted to write a story with vampires in it but “couldn’t imagine writing about a sympathetic vampire.” She then found Buffy and the idea of vampires being evil appealed to her “creative muse” so she created a character part Van Helsing, part Buffy Summers (and maybe a bit of Jane Austen too). This character’s name was Victoria Gardella Grantworth and she first appears in Ms. Gleason’s novel The Rest Falls Away.

romance, though it is a love story in part (it is also a historical novel with a very modern feel) but the best way to describe it would be as horror. Not “bloody, gory, scary horror” but again it can hardly be classified at all… exactly like Buffy now that I think about it! Let’s just say that this is an incredibly unique story with a very, very intriguing premise and characters. Where else would you find a debutante "Dancing at balls, attending the theater, [and] stalking vampires?" Of course, since she’s a part of Society she is expected to catch a husband, hopefully during her debut and when she 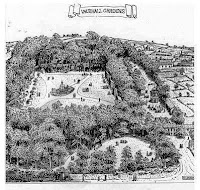 catches the eye of the much sought-after Marquess of Rockley she has to balance out her life of romance and fighting evil: “Fantasies about kissing might not be appropriate thoughts for a young lady, but then again, most young ladies didn’t wear ash stakes in their hair and seek out vampires.”

The Gardella Vampire Chronicles will likely become one of my favorite series even though I usually prefer my vampires a lot less evil and gruesome (I mean, red eyes? Yuck!). The characters are what really made me stay after I realized I wasn’t in for a vampire romance, that and how well thought-out the lore behind the vampires (they’re “offspring” of Judas Iscariot- hence, the reason they don’t like silver) and the vampire hunters (known in the story as Venators). There were times when I wasn’t too impressed with how Victoria acts but they were few and far between. I’ll admit to being more than slightly intrigued by Sebastian and Maximillian though!

The ending of The Rest Falls Away is not a happily ever after one, as fitting for this type of story. Nor did it come as a complete surprise to me though the method did. All in all it was a fitting climax to a dark, light, and sometimes gray novel so I will be reading the second story in this series Rises the Night very soon. Hopefully, more of the maelstrom that is known as Sebastian will have a large part in it!

First Paragraph: His footsteps were soundless, but Victoria felt him moving.


Interview With B(u)y the Book

Dancing at balls, attending the theater, stalking vampires. Without a doubt, Victoria was going to be an extraordinarily busy debutante.

Fantasies about kissing might not be appropriate thoughts for a young lady, but then again, most young ladies didn’t wear ash stakes in their hair and seek out vampires.

Maximillian is known for his cold and calculating kills, true, but apparently, your particular technique of late has sent the undead scurrying. It may have something to do with the fact that you still have in your possession the Book of Antwartha and are one up on Lilith; I am not certain. I just know that the vampires have been more wont to drink kegged blood than fresh in the last few nights.
“So you’ve come to take me to the Chalice, so I can hunt there?”
A look of horror washed the charm off his face.
“Absolutely not!” And then when he saw the faint smile she had allowed, he laughed. “Touché, my dear.”

“When I first accepted the Legacy, I did so innocently-- but I did not understand.”
“I thought it was fun-- to be strong, to be able to walk the streets alone at night, and to know that I could defend myself better than any man could. It gave me freedom that I had never imagined a woman could have!”
Posted by Ladytink_534 at 2:38 PM