A Whole World Inside Its Pages 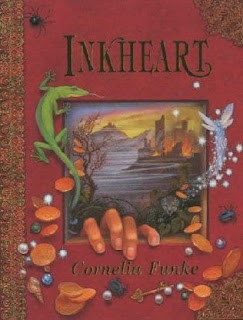 One cruel night, Meggie's father reads aloud from a book called INKHEART -- and an evil ruler escapes the boundaries of fiction and lands in their living room. Suddenly, Meggie is smack in the middle of the kind of adventure she has only read about in books. Meggie must learn to harness the magic that has conjured this nightmare. For only she can change the course of the story that has changed her life forever. This is INKHEART -- a timeless tale about books, about imagination, about life. Dare to read it aloud. 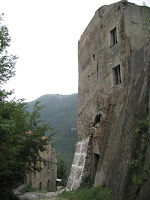 nk. Cornelia Funke is one such author who writes wonderful books but she’s most famous for her stories in the Ink trilogy. The first one is called Inkheart and it’s a story about another story whose characters have come to life through a skilled storyteller’s voice.

As a child, I loved to be read to and like Meggie, the books were always whispering to me, "promising [me] a thousand unknown stories, a thousand doors into worlds [I] had never seen before.” I also enjoyed reading aloud once I learned how to anyone or any thing that would sit still long enough. Thankfully I never had Mo’s gift with words! As I’ve gotten a little older, the stories stay mainly in my mind when reading but sometimes a book like Inkheart comes along that just begs to be read aloud. Cornelia Funke has created a beautiful story with phrases and paragraphs that I simply had to read and re-read. This book is one that should be 'tasted',

'devoured', and 'chewed throughly' too.

Inkheart is a magical adventure made of more than just words and letters, the author has breathed life into the characters. Everyone from Meggie and Mo to Dustfinger, Elinor, Capricorn, and all the minor characters too. Like in any good children's adventure story, the good characters are almost all true heroes while the villians all have hearts like "black stone with about as much human sympathy as a lump of coal." The only anamoloy really is Dustfinger as he is neither a typical hero nor a hard-hearted villian either… little wonder that he is my favorite character.

The author said, “Which book addict doesn’t know the feeling that the characters in a book can seem more real than the people around us? And there is of course a simple reason for that. For which real person would permit us to look into their hearts as deeply as a storyteller permits us to look into his characters’? Into the deepest regions of their souls we may spy, see all their fears, all their love and all their dreams.” Which pretty much sums up the reason I adore this story. Ms. Funke’s tale has received much attention including several awards as well as recently being adapted into the 2009 film of the same name starring Brendon Fraiser (whom the author has said she based Mo on. He even is the narrator on the audio books for the remaining books).

“Is there anything in the world better than words on the page? Magic signs, the voices of the dead, building blocks to make wonderful worlds better than this one, comforters, companions in lonlieness. Keepers of secrets, speakers of the truth… all those glorious words.” ~ Fenoglio

First Paragraph: Rain fell that night, a fine whispering rain. Many years later, Meggie had only to close her eyes and she could still hear it, like tiny fingers tapping on the windowpane. A dog barked somewhere in the darkness, and however often she tossed and turned Meggie couldn't get to sleep.