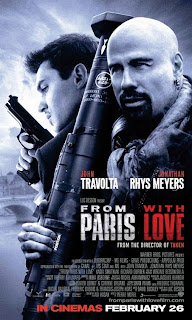 Trigger-happy special agent Charlie Wax (Travolta) leads rookie James Reese (Rhys Meyers) on a high-speed shooting frenzy through the Parisian underworld during a high-stakes CIA mission to foil a terrorist attack planned on the city. Before Reese realizes he’s bitten off more than he can chew, the duo discovers that he’s a target of the same crime ring planning the attack. With only 48 hours to save the city, there is no turning back and only one deadly way out. Pack your bags and get ready for a serious adrenaline-rush of adventure!

Somewhat of a “buddy” or taking it one step further, “mentor-

student” action movie, From Paris With Love stars Jonathan Rhys Meyers as James Reece, the wannabe agent and John Travolta as Charlie Wax the seasoned spy. It’s just a funny, somewhat dark, action packed movie where Travolta shows his crazy. He plays a character that is seriously nuts in this movie; sort of a comedic badass, but he’s also good at his job, which is namely killing terrorists.

High body count, drug use, explosions, car chases, and Jonathan Rhys Meyers (he plays James Reece) walks around looking pretty… for a good portion of the movie with a vase full of cocaine. Well, he doesn’t just look pretty because he’s the balance to Travolta’s crazy character and I enjoyed his performance enough that I may look into other things with him. Kasia Smutniak plays Reece's girlfriend Caroline and while I found the thought of them as a couple

I found this movie to be disjointed, somewhat predictable, and even at times flat but it was the chaotic mayhem that Travolta’s character wrought throughout the movie that I enjoyed. Some reviewers have called his acting “hammy” and “overblown” but that’s what I liked about it. You never know what he’s going to do next! I could see this as a TV show (as long as they don’t call it “Wax On, Wax Off”) sort of a Burn Notice meets Rush Hour. Truthfully I think it would have been better that way since the plot would have more time to develop slowly instead of cramming everything in one mad rush at once as this movie seems to do.

A lot of hard work did go into this film though. It was filmed exclusively in Paris (and yes, even at the Eiffel Tower), Travolta went bald for the first time for the role, most of the actors did a good majority of their own stunts, and the manequin shootout scene is beautifully choreographed yet looks natural. As long as you don’t go into this film with any expectations except to see John Travolta play a fun character and Jonathan Rhys Meyers looking smart and gorgeous then I’m sure you’ll enjoy From Paris With Love with reservations just as I did.