This Flower Has Thorns 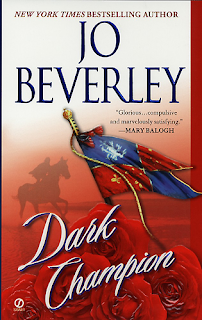 Orphaned and desperate, Imogen of Carrisford flees when a brutal lord invades and takes possession of her castle. There is only one man she can turn to for help.

He is FitzRoger of Cleeve, rumored to be a ruthless champion in battle and a tyrannical master. Imogen is stunned at the very sight of his powerful body, yet it is his cool green eyes that penetrate her very soul, making her tremble with both fear and desire. Sheltered all her life, she needs such a man to defend and protect her… yet she dares not trust him to put her desires before his own. But even as she vows independence, boldly standing beside him against treacherous enemies, her defenses crumble… falling helplessly to the gentle fury of her warrior’s love.

Though it has been a long time since I read a historical romance, I tried this book because I have several Jo Beverley romances in my library and I never have read anything by her before. Set in England in the year 1101 during the reign of Henry I (who does make an appearance in the story), the author portrays the time period better than any other I have come across. For one thing she doesn’t try to get fancy and it’s written in plain English, for another the main characters are a Lord and Lady so things like poor health conditions rarely make it into the story so it’s not as dark and drab as I usually consider medieval romances to be. 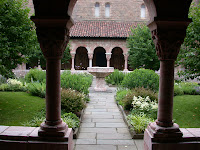 There were times I forgot just how young the main character Imogen was (she’s 16 and is the youngest heroine Beverley has written) but then again, that was an acceptable marrying age during this time period. She does occasionally act her age but for the most part, she’s very mature. Living an extremely sheltered life, she “had never experienced violence… [now she has] nearly drowned in it.” At the very start of Dark Champion, the reader gets to see her adapting to her new situation and by the end; she’s very much a new person: “Was she not called the Flower of the West? Flowers were not weak. She would be stronger for having been crushed." She has a bit of Scarlett O’Hara (the movie version) in her at times in that she‘ll do anything to save her home. FitzRoger isn’t really a Rhett Butler type even though he starts off very cold, the reader doesn’t get many times with his POV but he was still a memorable character even if we don’t get to know him very well.

In an interview, the author claimed to "have a very soft spot for Imogen and FitzRoger from Dark Champion. Even though they started out seeming so different, in fact they were very similar and they will grow together nicely. I'm sure they're going to be no-nonsense about life and just all-around good people." There are three other books that connect to The Dark Champion. They are The Shattered Rose (FitzRoger makes a small appearance so it‘s not technically connected), Lord of Midnight whose main character is FitzRoger's best friend Sir Renald de Lisle, and Lord of My Heart which is a story of FitzRoger's uncle Aimery de Gaillard.

First Paragraph: Imogen of Carrisford stood in the dark cold, shivering at the muted sounds of horror. Even here in her castle’s secret ways, she could not escape the distant clash of arms, the howls of battle rage, the frantic bellowed orders and the screams of terror.


Picture Explanations
Castle: An old medieval castle that could be Carrisford
Garden: Carrisford has a lovely one even after the invaders
Cave: Imogen and FitzRoger hide out in one of these after escaping an ambush
Posted by Ladytink_534 at 8:32 PM