For God's Sake, Get Out! 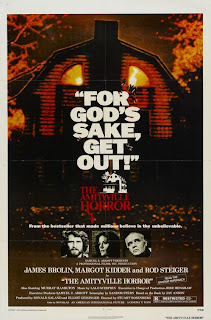 There's no place like home...for bloodcurdling horror! James Brolin, Margot Kidder and Academy Award® winner* Rod Steiger fall prey to the powers of darkness in this spine-tingling tale of a house possessed by unspeakable evil. One of the most talked-about haunted-house stories of all time, The Amityville Horror will hit you where you live.


For George and Kathy Lutz, the colonial home on the river's edge seemed ideal: quaint, spacious and amazingly affordable. Of course, six brutal murders had taken place there just a year before, but houses don't have memories...or do they? Soon the Lutz dream house becomes a hellish nightmare, as walls begin to drip blood and satanic forces threaten to destroy them. Now the Lutzes must try to escape or forfeit their lives - and their souls!

The only part of the story that is known for a fact is that before the Lutz family moved in, there was a brutal murder of an entire family committed by the eldest son (it’s been said that he had help though he never mentioned it) and that story can be found in dozens of books, some non-fiction and some not. A tragedy sure, but one that shouldn’t get all that much press before it was forgotten… except that the next owners George and Kathy Lutz and their children experienced something remarkable. Was it real or was it a hoax? That’s the question that has been asked ever since the Lutz family ran out of their new home after only living there for 28 days (less than that in the film) claiming that their home was possessed. Psychics, reporters, and especially ghost hunter types descended on the house en masse and the Lutz’s story was made into a bestselling book ) which in turn became the basis for the 1979 movie The Amityville Horror. George and Kathy Lutz both stood by their claims until their deaths.

The problem I have with haunted house-type horror movies (and sometimes books), is that it’s rarely explained as to the why and how. The Amityville Horror is no exception though the filmmakers did throw in a very small scene about Indians and a sorcerer that had fled the Salem Witch Trials being inhabitants of that land at one time. What really bothered me more than anything else is that I never got the feeling that the house itself was a character and that’s what I always look for in a successful haunted house movie.

However, I got pretty much what I expected out of the film, a little bad acting and a few bad special effects though they weren’t quite as badly done (by today’s standards) as I thought it would be. On the other hand, the only time I jumped during the entire film was when that black cat jumped up on the windowsill to hiss at George. I have to admit that I didn’t really enjoy the movie and had to force myself to finish it. I’m not really sure why because it’s not bad and it’s not even all that dated (when you don‘t count the purple pig) yet, Rod Steiger (the priest) and the dog Harry are probably the best actors in this film in my opinion.

That’s not to say James Brolin and Margot Kidder (who play George and Kathy Lutz) are bad actors, there’s just some parts that they overacted, especially Brolin’s whole “I’m coming apart!”- number and when Kidder wakes up from a nightmare screaming, she sounds incredibly fake too. Another thing that bugged me, all the extra characters that didn’t really go anywhere. The police chief for example, besides stalking some characters for a little while, what purpose does he serve? Where did the psychic lady who is married to George’s co-worker go to after she discovered the red room?

One thing I am happy to say is that I did want the characters to burn the house down and salt the earth at the end but other than flies, black goop, slamming doors and windows, and bleeding walls/ stairs how much was the house really responsible for? Was George always a nut with a penchant for firewood? In the film, George smacks Kathy and she just cries and runs upstairs. She should have packed up her kids and left! Let him stay in the psycho house if he wanted to!

The Amityville Horror was nominated for an Oscar for Best Music/ Original Score, two Saturn Awards for Best Actress and Best Horror Film, and a Golden Globe also for Best Original Score but it didn't win any of them. I will say that the soundtrack is great though and one of the very best things about the film. A huge blockbuster when it was first released, the first film in the Amityville franchise just doesn’t work as well today. However, you can go make that decision for yourself.

There have been several more films in this franchise including two theatrically released ones, five low budget, and one remake of the original in 2005 starring Ryan Reynolds and Melissa George. I know I had seen this film when I was younger but I really didn’t remember much about it and what I did remember was slightly tainted by the 2005 remake of the film (not that it was bad, I just remember that one better) which I did see. I did know that this was based on a "true story" (though, there are still many debates one the truthfulness of the real Lutz family) because I had read one of many books about it a long time ago and caught one of the Histories Mysteries episodes about it. Do I believe the Lutz’s story? No, not really because there have been people who have lived in that house since and as of May 2010 it’s for sale again yet the only problems that have been reported are the tourists.

Kathy Lutz: I just wish that... all those people hadn't died here. I mean... ugh! A guy kills his whole family. Doesn't that bother you?
George: Well, sure, but... houses don't have memories.


In Search of... The Amityville Horror: