They Were Two Times the Fun! 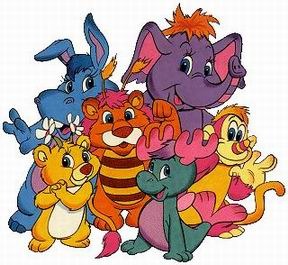 Does anyone remember The Wuzzles? It was a highly marketed Disney cartoon show in the 80’s about a bunch of animals living in the land of Wuz. What was so special about these animals was that “every single thing is really two in one”. For example: a monkey + a rhino = Rhinokey. Here is a list of all the characters: 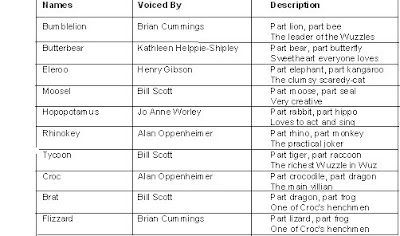 Despite all the toys, clothes, stuffed animals, books, and even radios made to make this wonderful show even more appealing, only 13 episodes were ever made. Mainly because Bill Scott died (he was the voice of several main characters), and partly because it wasn't making that big of a hit in the United States so Disney pulled the plug.

I only vaguely remember the show and that's mainly because I had the Butterbear and Bumblelion stuffed animals when I was little. But nowadays with all the nostalgia sites cropping up more and more people have become aware of this little gem.
Find the Wuzzles Online
Imdb.com
Wikipedia
TV.com
Links:
Unofficial Wuzzle Page
Last night I stumbled onto a couple videos and I was in Wuzzle-heaven for a little while. I got to watch the first cartoon: Bulls of a Feather and a commercial for the stuffed animals.
The Wuzzles - Episode 01