I Love The Land Before Time! Yep, Yep, Yep!

Join Littlefoot, Cera, Spike, Ducky and Petrie on a magical journey that begins long ago when dinosaurs roamed the land threatened by earthquakes and volcanoes.

Suddenly all alone in a turbulent world, a young brontosaurus named Littlefoot sets off in search of the legendary Great Valley, a land of lush vegetation where dinosaurs can thrive and live in peace. Along the way, he meets four other young dinosaurs, each one a different species. During their amazing journey they encounter incredible adventures, overwhelming obstables and unforgettable lessons about life and sticking together.

Presented by George Lucas and Steven Spielberg, and directed by Don Bluth, this enchanting animated tale of hope, survival and love is sure to charm the entire family. 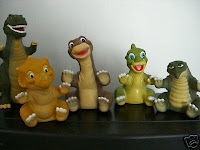 , books, toys (remember the hand puppets?), and it’s now even a regular cartoon show on TV. But no one in their right mind would ever confuse the original with the newer DVD or cartoon series. I mean, they’re really cute in a cotton candy kind of way but they just can’t live up to the original film. Almost all of Don Bluth’s films have darker undertones than regular animated movies and you can tell just by looking at the animation that Bluth didn’t have anything to do with the spin-offs. Actually Don Bluth hasn’t had anything to do with animation in a long time but I digress.

I loved The Land Before Time when I was little, in fact, it was the very first movie I ever owned! I was thinking about it the other day and I realized, I hadn’t seen the movie in about 5 or 10 years so I sat down to watch it and I found it just as exciting and sad as I remembered it. I just wish Steven Spielberg or whoever would get off their lazy rear and make a 2-disc special edition of the movie like Disney’s been doing lately!


Commercial for Puppets (You may have to turn up the volumn!)