There is Something Going on in Hill House "An evil old house, the kind some people call haunted is like an undiscovered country waitin to be explored. Hill House had stood for 90 years and might stand for 90 more. Silence lay steadily against the wood and stone of Hill House and whatever walked there, walked alone." Thus begins one of the most chilling, most frightening, truly unforgettable horror films ever to be put on celluloid.

The classic forerunner of such films as Poltergeist and The Shining, The Haunting is a hair-raising screen rendition of Shirley Jackson's riveting gothic novel The Haunting of Hill House. Its premise is simple: Dr. Markway, a trained anthropologist with a special interest in psychic research, wants to try what he hopes will be a true excercise in terror. He's heard about the reputation of Hill House which claimed the lives of several of its young inhabitants and invites two carefully chosen assistants to join him. The one thing they have in common is experiences with the supernatural. Mrs. Sannerson, who has inherited Hill House, insists that her young nephew Luke (Tamblyn) go along with the group so that nothing improper can go on between the unmarried women and the handsome Dr. Markway. The young nephew is a skeptic until he enters the eerie world of Hill House. Like him, you may not believe in ghosts, but you cannot deny the terror of The Haunting!

I was flipping through the channels the other night and I saw that The Haunting (1963) was on. I had never seen this version (the original?) before but I had seen the 1999 remake when it first came out, although I can only vaguely remember it now! The story is actually pretty interesting and makes you want to go pick up the book that it’s based on (for those that don’t already know it’s called The Haunting of Hill House by Shirley Jackson). It really wasn’t that scary, but it’s not dated at all. Probably because the only special effect was a door that stretched itself (it was actually just a rubber door that some stagehands pushed against). I loved how every death or ghost activity thing happened slightly off-camera though because it gives a more psychological edge to it. 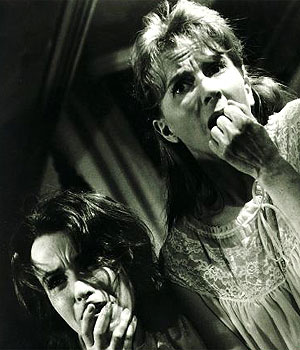 I did enjoy the actors’ performances (especially Claire Bloom as Theo) but the most memorable character is the house itself. Of course that’s usually true of movies about haunted houses. This is why almost every haunted house movie I’ve ever seen reminds me of the other… which leads me to getting all of the movies confused! Overall I enjoyed The Haunting and because I didn’t expect much from it going in, I was even more pleasantly surprised!

~Since I watched this on TV I can’t really tell you whether or not the DVD is worth buying but the version I saw was cleaned up very well and it was in widescreen. I have heard that the commentary on the DVD is supposed to be really good though!