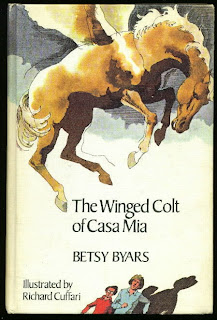 A former movie stunt man and his bookish nephew, spending the summer together, seem to have little in common until a winged colt enters their lives.

Charles in unhappily living with his Uncle Coot for the summer. The two have nothing in common, and the tension between them is high until Uncle Coot's unusual neighbor, Mrs. Minney, gives them a foal recently born to her mare. Both Charles and Uncle Coot are shocked to discover that the young horse has wings--and the ability to fly.

Betsy Byars has been writing for children for many, many years and has written several award winning novels including one that won the Newbery award. She has over 50 books published, several of them are parts of series but most are stand-alone novels like her 1973 story The Winged Colt of Casa Mia. It’s not a ver 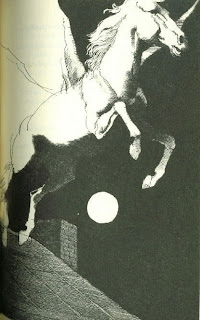 y popular story nowadays even if it does have a flying horse in it, but it was made into a TV movie in 1977 for the ABC Weekend Specials. It was the very first episode.

Animal stories were always the first thing I’d pick up as a child and it’s really not that different now. I truly expected to love The Winged Colt of Casa Mia but it was just okay. Not an amazing story, not even all that interesting except the flying horse named Alado who had only a few brief scenes because it was mainly about a boy whose mother has neglected him all his life then finally ships him off to live with his Uncle Coot who is a retired stunt man. It’s not a bad story at all but there was just a randomness to it that I didn’t really enjoy. The man tells the story so you get to see first hand just how annoying this smart kid can be and bratty too without really meaning to be.

Even though she is a Newbery winning author I wasn't sure if I had read anything by Byars before but I was wrong! I had read both Wanted... Mud Blossom and The Cybil War when I was younger. Though Alado bears resemblance to the legendary Pegasus and Byars was inspired by her husband’s hobby of flying gliders, The Winged Colt of Casa Mia unfortunately crashes and burns in my opinion.

Links:
A short biography and a list of Betsy Byars works is on her Wikipedia page.

Video:
This is a very short clip of the actor that plays Charles in the adaptation of The Winged Colt