Leaving Civilization to Live in the Wild 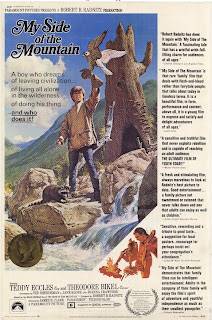 My Side Of The Mountain, based on the book by Jean George, is the unique adventure of thirteen-year-old Sam Gribley. Sam's hero is naturalist poet Harry David Thoreau, so Sam writes a note for his folks, packs up and leaves home for the challenge of wilderness living. Realizing his dream, Sam feeds himself, builds a makeshift home and learns to live in harmony with nature-- miles from civilization.

Title: My Side of the Mountain
Release: 1969
Genre: Family- Adventure
MPAA Rating: G
Based On: My Side of the Mountain by Jean Craighead George
Writer: Joanna Crawford, Jane Klove, & Ted Sherdeman
Director: James B. Clark
Music By: Wilfred Josephs
Produced By: Robert B. Radnitz
Distributed By: Paramount Pictures
Run Time: 100 minutes

Stories that take place in nature is author Jean Craighead George’s speciality. Her books all contain beautiful messages that truly speak to the reader, young or old but in My Side of the Mountain she truly captured something wonderful. That book was made into a film set in Canada ten years after the story was first published. The

Ms. George’s Newbery Honorree was a story I read while still in elementary school but the general theme of running away to live off the land was something I could never forget. Once I learned it had been made into a movie I knew I just had to see it. I aso knew without a doubt it would have the most beautiful settings no matter what. However, I wasn’t planning on that being the main highlight of the film which was unfortunately what happened.

Honestly what probably spoiled this for me was that there was just too much going on and there were too many writers attached to the project who all seemed to have different ideas. Sam’s si

mple beloved story of wanting to live in the wild away from the crowded city evolved into Sam’s search for learning about algae, dealing with death, and all the while trying to live off the land. I wanted to like this movie so much but I was just too disappointed in it. Maybe if I wasn’t as familiar with the book I wouldn’t have had as many problems but I’m just glad that the scenery stayed beautiful through it all.

The film doesn’t end with a “no animals were harmed during the making” credit so I’m not sure if the animal deaths are real or not. The producers do say that they “wish to express our thanks to Crawley Films, the Department of Natural Resources and Wildlife and the people of Knowlton, [Quebec] for their generous co-operation” though. One good thing came of watching the movie version of My Side of the Mountain: it made me want to see more films where nature and animals were the main focus!


Related Post:
My Side of the Mountain by Jean Craighead George