Life as a ship’s boy aboard HMS Dolphin is a dream come true for Jack Faber. Gone are the days of scavenging for food and fighting for survival on the streets of eighteenth-century London. Instead, Jacky is becoming a skilled and respected sailor as the crew pursues pirates on the high seas.

There’s only one problem: Jacky is a girl. And she will have to use ever bit of her spirit, wit, and courage to keep the crew from discovering her secret. This could be the adventure of her life- if only she doesn’t get caught…

Starting in the dirty streets of London and ending up on the ship Dolphin sailing the seas and searching for pirates, L.A. Meyer’s Jacky goes through all kinds of scrapes and adventures in

the first book of the Bloody Jack series: Bloody Jack: Being an Account of the Curious Adventures of Mary “Jacky” Faber, Ship’s Boy. She quickly learns that “it's easier bein' a boy, 'cause no one remarks upon me bein' alone. Lots of boys are alone but girls never are.”

A girl from the 1700’s; back when ladies were expected to behave as dolls, decides to pull a Deception and pretend to be a boy yet not for reasons I had expected. She’s an orphan who has always wanted to go to sea so one day she “connives to get on board a British warship just to eat regularly and have a place to stay.” The author said he was inspired be the old British and Celtic traditional songs such as Jackaroe which is about a young girl following her beau out to sea but Mr. Meyer wanted something a bit more to the story and that’s how B 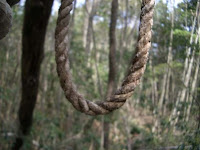 loody Jack came to be.

The main character is not a warrior-type at all though, more of a “peaceful sort of a coward” but she’s “only brave as she needs to be in order to protect herself and her friends, and no more.“ Jacky states several times throughout the book that she is a coward yet it seems she is actually remarkably brave for a girl from that period (the author does such a good job capturing the era too). Especially since she had the pluck to better her situation. I know there were women pirates back then and I've always assumed 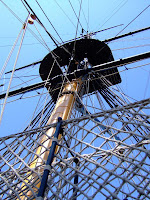 that some ladies passed for men when women were still looked upon as far inferior to men so I'm always curious about stories like this one.

Once someone else learned of The Deception I struggled a little with keeping my attention on the story. However, wanting to know what Jacky was going to do next whether it be resourceful, cunning, or clever is why I still finished Bloody Jack. The first half of the book was my favorite however such as when Jacky says, “I have to look down all shy and I hear a few mutters of Bloody Jack and I guess I ain't never gonna get rid of that, especially if I keep on killing people.” I do want to know if Jacky’s premonition of her future is correct (“A girl what’s born for hangin’ ain’t likely to be drowned.”) so I may have to read more books in this series.

First Paragraph: My name is Jacky Faber and in London I was born, but no, I wasn't born with that name. Well, the Faber part, yes, the Jacky part, no, but they call me Jacky now and it's fine with me. They also call me Jack-o and Jock and the Jackeroe, too, and, aye, it's true I've been called Bloody Jack a few times, but that wasn't all my fault. Mostly, though, they just call me Jacky.

Picture Explanations
Ship: A good representation of the HMS Dolphin
Noose: Jacky believes one day she will be hanged
Mizzentop: Where Jacky and the rest of the Brotherhood play