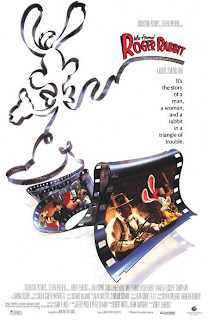 It's 1947 Hollywood and Eddie Valiant (Bob Hoskins), a down-on-his-luck detective, is hired to find proof that Marvin Acme, gag factory mogul and owner of Toontown, is playing hanky-panky with femme fatale Jessica Rabbit, wife of Maroon Cartoon superstar, Roger Rabbit. When Acme is found murdered, all fingers point to Roger, and the sinister, power-hungry Judge Doom (Christopher Lloyd) is on a mission to bring Roger to justice. Roger begs the Toon-hating Valiant to find the real evildoer and the plot thickens as Eddie uncovers scandal after scandal and realizes the very existence of Toontown is at stake! Who Framed Roger Rabbit is deliciously outrageous fun the whole family will enjoy.

Animation, live action, and a little film noir thrown in for good measure, Disney and Amblin’s multiple Oscar winning picture Who Framed Roger Rabbit is still better made than some films to

day 20 years later. That’s despite the fact that this was made before any computers or digital imaging that makes up so many of today’s animated films. It still took the crew two years to complete this film, which is loosely based on Gary K. Wolf’s book Who Censored Roger Rabbit? (the author later sued Disney over royalties) but mostly just pays homage to all the old animators of those great cartoons and movies.

Technically, “[this film is] three gigantic movies in one. You had a 48-minute animation movie, which is just a little under what an animated feature runs. You had a live action period movie with giant stunts and giant sets and vehicles and guns and that all stuff, and you had this huge special effects movie where there were 1500-some composite shots.” The whole Redcar/Cloverleaf de

bacle was actually based on the real conspiracy “where the tire companies and auto companies conspired to get rid of the trolley cars in Los Angeles cause the car was the future.”

“The thing that was interesting about this movie, and of course, historic about this movie was that it [was] the first time that all the studios who owned cartoon characters allowed them to be in a competing studio’s movie. So obviously, they were able to get all the Disney characters bein

g because it was a Disney movie but it was Steven’s [Spielberg] main contribution to the production of this movie was he personally went and acquired these competing cartoon characters from other studios. You’ll probably never see this again with the Warner’s cartoon characters in with the Disney characters.”

Richard Williams (who was actually mentored by the great Milt Kahl) was the animation director. Williams described Roger Rabbit as having a "Tex Avery's cashew nut-shaped head, the swatch of red hair...like Droopy's, Oswald the Lucky Rabbit's overalls, Porky Pig's bow tie and Mickey Mouse's gloves." The character himself acts sort of Charlie Chaplin-esque which plays off wonderfully with Bob Hoskins straight-guy performance. If it weren’t for Hoskin’s performance that is so believable the whole film would have fell apart. You truly believe he’s picking that rabbit up by the ears or talking to him when he’s actually looking at air. Another terrific actor in this film was Christopher Lloyd

whose character Judge Doom is one of his best performances. He never blinks! Now that takes dedication.

”A lot of people think this movie’s a cartoon, it’s actually about civil rights” and to be honest, I actually like Who Framed Roger Rabbit more now than I did as a kid. I love how the toon music blends so well with the sort of jazz-like sounds and it’s just perfect for this picture. Charles Fleischer, Mel Blanc, and all the other voice actors of the film also did a marvelous job adding so much character to an already good film making it a great and timeless film.