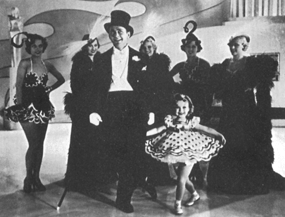 Shirley Temple proves that laughter is a powerful cure for despair in this lovable comedy. To uplift American spirits during the Depression, the President appoints a "Secretary of Amusement," whose job is to entertain the country so everyone can forget their troubles! But a group of businessmen getting rich off the misery of others tries to sabotage the new Secretary's efforts. It's up to tiny singer/ dancer Shirley Dugan (Temple) to remind Americans what's important in life. Featuring the famous number, "Baby Take a Bow," this charming musical will make you want to STAND UP AND CHEER!

Unlike the misleading synopsis above suggests, Stand Up and Cheer stars

award-winning actor Warner Baxter as Lawrence Cromwell who is the Secretary of Amusment and Madge Evans as Mary, the lady that eventually becomes his love interest. All the other talent in the film (and there are a lot) like Shirley Temple and James Dunn just have small cameo roles.

Even if it is Shirley Temple’s first official movie role, I thought that this was an odd little film that is surely something only Temple enthusiasts have kept it in circulation today (it was well recieved during it's first release though). The costumes were cheap-looking (except one of course!), the plot line was barely there, and a part with a penguin (who is supposed to Jimmy Durante) is something the animal cruelty people now would have never let air since the poor animal was 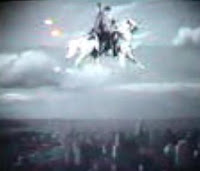 not only costumed but the actor drops him at one point too. Despite all these negative comments, I did enjoy some parts of the movie like when two of the bad guys (Frank Mitchell and Jack Durant) did this incredible acrobatic routine and the now famous Dunn/ Temple "Baby Take a Bow" number.

Really, little Shirley could have been the saving grace of this picture.... if she had had more than a 5-10 minute scene and then her brief part at the end. Regardless of how much I disliked a lot of the movie, I have to admit it at least had some interesting parts and songs! Plus it helped put Shirley Temple on the map and not many other films can claim that.

We’re Out of the Red (bad quality):