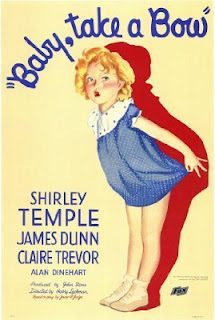 In this lighthearted comedy which was her second star vehicle, Shirley Temple sings, tap dances, and displays all the charm and talent which have made her the biggest child star of all time.

Shirley's father (James Dunn) is an ex-con trying hard to make an honest living by working as a chaffeur. But he runs into trouble when a pearl necklace dissappears from his employers home and the detective on the case decides he's guilty. Luckily, Shirley finds the pearls and winds up the case in short order. But not before she engages her father and the detective in the film's most enjoyable scene- a hilarious game of hide and seek.

“On account’a” Shirley Temple‘s lasting fame, there are many films that have

been preserved that may have fallen into obscurity and none so much as her earliest ones. Baby Take a Bow was one of the earliest feature length films that she starred in and her very first for Fox Film Corporation. Temple stars alongside James Dunn whom she had acted with during a previous role in Stand Up and Cheer. The song that they performed together in that film was called Baby Take a Bow funnily enough; it doesn’t appear in this particular film however.

Originally called Always Honest, this movie is actually an adaptation of the little-known play Square Crooks by James P. Judge. It does however bring to

mind other Temple vehicles (such as Little Miss Marker) especially when instead of playing the role of “cute-little-girl-whom-you-forget-about-as-soon-as-the-action-starts,” Shirley Temple instead steals the whole show.

A year after this was made, all the original negatives and master prints were thought destroyed after a fire but a copy was found with only three minutes missing from it and that is what is shown today (it isn‘t very noticeable). It’s also what was colorized in 2005 and that it what I

watched. I almost believe I would have enjoyed the black and white version more! It would have made the action scene near the end (which is why this film was banned in Germany) seem more dramatic at least so I suggest avoiding the colorized version if possible.

Truly this wasn’t a bad film and it actually did have many cute moments. This is genuinely a “for curiosities’ sake" film and without little Miss Temple, Baby Take a Bow would now be largely forgotten as it is mediocre except for its song and dance performance.