The True Story of a Dog 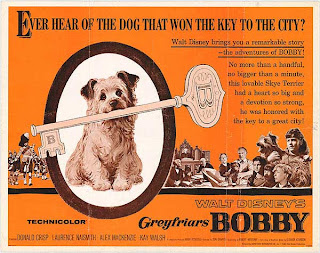 This is the true story of a dog who lived almost a century ago. His monument stands in Scotland's capital city of Edinburgh to this day. Remembering his devotion to an old man whom he loved in life and guarded for fourteen years after death had parted them. He made happier the lives of a whole generation of children who knew him. This is his story. 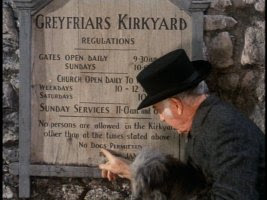 studio has cornered the market on lovable canines. Besides Pluto and Goofy, many of the earlier movies starring dogs are based on books and Greyfriar’s Bobby is no exception however, the author Eleanor Atkinson actually based her novel on a true story.

For the most part, Disney’s Greyfriar’s Bobby has been forgotten over time but it’s still a lovely, quiet little film that just left out much of the story’s exciting moments that may have had a more lasting impact on audiences. My only real complaint about the film is actually the same one I had about the book and that is that the Scottish accents in the movie are a bit "hard on American ears" 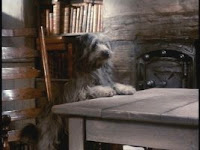 but since I read the book first (and had a really hard time understanding some of the dialogue even then) I was better prepared.

Disney is the only company that has made a Greyfriar’s Bobby movie adaptation that is mostly loyal to Eleanor Atkinson's book. In addition, it is the only one to use a Skye terrier (rumored to have actually been named Bobby), a mostly extinct breed now that was thought to be what Bobby was. MGM’s Challenge to Lassie (1949) replaced Bobby with Lassie and Piccadilly Pictures changed so much of their 2005 adaptation that only the bare bone of the plot was still true. 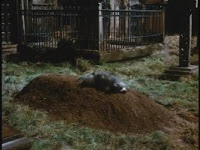 Walt Disney himself made a trip to Edinburgh to see where Bobby roamed in life but because of modern things like telephone poles, it was decided to film mostly on a studio set however, those beautiful landscapes in the film are from the location. I was a little surprised to learn that this wasn’t Donald Crisp’s (James Brown the kirkyard caretaker) first experience with the story of Greyfriar’s Bobby either. He played Auld Jock in the Lassie version of the story Challenge to Lassie!

Links:
Video:
The first part of the complete movie: