Talking to the Animals 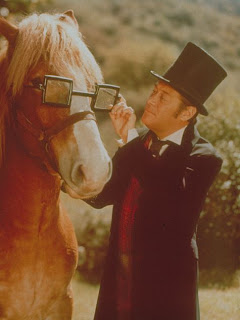 It's the perfect prescription for the whole family!

Get ready for the wildest adventure of a lifetime in the most ambitious musical production ever brought to film. Earning a 1967 Academy Award nomination for Best Picture, this dazzling fantasy turns both ordinary and exotic animals into talking, dancing and singing sensations! Rex Harrison is unforgettable in this inspiring adaptation of Hugh Lofting's classic stories.

Step into the English country home of the good doctor as he performs remarkable treatments on the wildest variety of patients you can imagine. Discover his secret cures and watch with wide-eyed excitement as he and his four-legged, fine-feathered friends charm their way into your heart.

Although Doctor Dolittle was nominated for nine Academy Awards (it won only two) it was still seen as a financial flop at the time. Which is incredibly surprising to me because its one of my (many) favorites, especially when I was little. I think it might even be the first

film I had ever seen Rex Harrison in and he has been someone whom I have greatly admired ever since.

The movie has a wonderfully talented cast including the ever charismatic Rex Harrison who "sings" on pitch, acts, and puts up with a billion animals all at once. From my experience all musicals, even the ones I love, have at least one or two musical numbers that the movie could have done without. In Doctor Dolittle, I love all the songs except one, At the Crossroads which is sung by the character Emma "Fred" Fairfax played by Samantha Eggar. I honestly think that the number was thrown in only so Eggar would have her own song and it just doesn’t fit the film.

I think the costumes and special effects are great for their time period but they don’t really hold up to the test of time very well. You can tell which animals are fake and the "fictional" animals (Pink sea snail, Luna moth, and the Pushmi-Pullyu) are nearly laughable they are so dated. I actually envy my younger self when I watch this film. I never believed that those creatures actually existed, but they looked real enough to me then that it was possible for me to get caught up in the make-believe. Even with all its faults, it's still a wonderful and fun family film.

~ The DVD is a huge disappointment (no bonus features, just a trailer) but I do recommend reading the Doctor Dolittle books by Hugh Lofting that this movie is based on. I have only read one and although it was a long time ago I still remember it fondly. I’m seriously thinking of getting them all from the library soon.