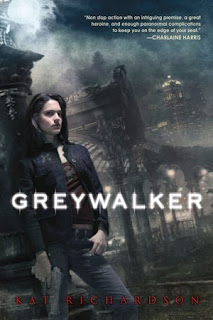 Harper Blaine was slogging along as a small-time P.I. when a two-bit perp's savage assault left her dead. For two minutes, to be precise.

When Harper comes to in the hospital, she begins to feel a bit ...strange. She sees things that can only be described as weird-shapes emerging from a foggy grey mist, snarling teeth, creatures roaring.

But Harper's not crazy. Her "death" has made her a Greywalker-able to move between our world and the mysterious, cross-over zone where things that go bump in the night exist. And her new gift (or curse) is about to drag her into that world of vampires and ghosts, magic and witches, necromancers and sinister artifacts. Whether she likes it or not.

Private investigators who deal with the supernatural like P. N. Elrod and Jim Butcher’s heroes have become very popular over the past several years. With her debut novel Greywalker, Kat Richardson proves that her heroine Harper Blaine can most certainly play with the big boys

without being a “man with breasts” (she actually started out as male but to relate more, the author made her female) or a typical cliché.

Smart, funny, and incredibly interesting are the best ways to describe this urban fantasy/ paranormal/ horror mystery. Although it’s the first book in the series and the first thing published by this author you would hardly guess due to how well done the characters and the story is. There were a few parts that confused me and some of the subplots were a little complex but most of the story was straightforward and explained very well. 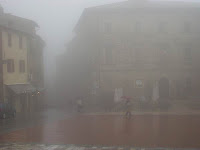 Ms. Richardson claims that she got her idea for this series from watching the old My Partner the Ghost (aka Randall and Hopkirk, Deceased) TV show as a kid and later on in life playing with the idea. Ghosts and other supernatural creatures need help just like everyone else and whom would they be able to go to? Harper Blaine that’s who! She’s still human but because of her brush with death is becoming more and more aware of their world (the Grey).

Kickass heroines that have great supportive friends have become fairly common in this genre (Jaz Parks, Mercy Thompson, Anita Blake, Merry Gentry, Sookie Stackhouse, etc.) and Harper is hardly any different but the whole premise of the series is so different (despite the expected ghosts, witches, vampires, etc) that it manages to stand out and be unique. So far, only three books in this series have been released: Greywalker, Poltergeist, and Underground but more are being planned and written. I’ll be reading the second one soon!